Some of the words that defined the week of December 20, 2019 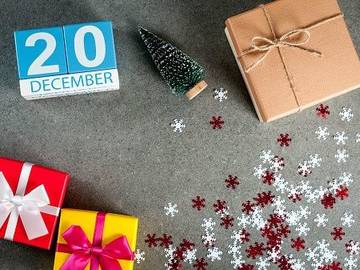 This article pairs well with a cup of cheer.

The feel-good word of the past week, at least for people who enjoy Christopher Nolan movies, was tenet.

A tenet is “a principle, belief, or doctrine generally held to be true.” A tenant is “one who rents or leases a dwelling (such as a house) from a landlord.” We occasionally see these words confused; if you would like a tool for distinguishing between them simply try to remember that tenants can have tenets, but tenets cannot have tenants.

The sudden and dramatic appearance of a pre-winter squall on Wednesday sent many scurrying to their dictionary in order to find out more about this weather phenomenon.

The sense of squall referenced above is “a sudden violent wind often with rain or snow.” The word is probably of Scandinavian origin (it is akin to the Swedish skval, meaning “rushing water”). Squall may also mean “a short-lived commotion,” “a raucous cry,” and “to utter in a strident voice.”

While we’re on the subjects of strident voices uttering things, raucous cries, and commotions, a politician last week used the word irregardless, and a million angry Twitter accounts squalled squalls in a squall.

During the debates on impeachment at the House of Representatives yesterday, Rep. Doug Collins of Georgia reignited an enduring fight when he used the word “irregardless.”
— Ephat Livni, Quartz (quartz.com), 19 Dec. 2019

Many people are of the opinion that using irregardless unironically (irironically?) makes a person appear less intelligent. You may decide this for yourselves, for the indicators of intelligence are peculiar to each of us, and vary widely. For instance, some lexicographers have been known to claim that it is loudly declaiming “irregardless is NOT a word” that makes someone appear less intelligent. Every major modern dictionary defines irregardless, because it is a word. Anyone who has a problem with this can meet us behind school later today to settle this the old fashioned way: with copious citations of use in published, edited prose over the past 225 years.

There were a number of other words spiking in lookups last week due to the impeachment investigation into (and subsequent impeachment of) President Trump. Unsurprisingly, impeach was among these.

The House of Representatives on Wednesday impeached President Trump for abuse of power and obstruction of Congress, making him the third president in history to be charged with committing high crimes and misdemeanors and face removal by the Senate.
— Nicholas Fandos and Michael D. Shear, The New York Times, 18 Dec. 2019

There are a number of possible meanings to the word impeach, which has been in use in English since the middle of the 16th century. The citation above, which obviously distinguishes between being impeached and being removed from office, nicely illustrates the sense of the word that is most relevant of late: “to charge with a crime or misdemeanor; specifically, to charge (a public official) before a competent tribunal with misconduct in office.” While impeach has been used over the centuries to refer to removing a person from office, that sense is inapplicable to the U. S. government. Presidents (and other officials) must be tried and convicted subsequent to being impeached before removal can occur.

A use of adjourn kicked off the impeachment proceedings recently, while the end of the day’s proceedings featured the use of gravamen; both words spiked in lookups as a result.

Gravamen means “the material or significant part of a grievance or complaint,” and is the kind of word that tends to provoke excitement in people who remember law school fondly, and induces boredom in everyone else. But gravamen needn’t only cause boredom in the non-lawyers among us, as the word has a number of interesting aspects. For one thing, it has two plurals, gravamens and gravamina. For another thing, the Latin gravis (meaning “heavy”) serves as part of its origin, a root that it shares with other English words such as ingravescent (“gradually increasing in severity”), graveolent (“having a rank smell”), and gravedo (“cold in the head”). What more could you want from a word?

Our Antedating of the Week: 'immoral'

This week our antedating is immoral, a word defined as “not moral,” and, in a broad sense, “conflicting with generally or traditionally held moral principles.” Someone is always being immoral somewhere or other, and it turns out the word for this behavior is a bit older than we thought. Our earliest record of use had come in 1660, but recent findings show that we’ve been calling people and things immoral since almost a century prior to that date.

You seme to deduce an argument against this Sacrifice made by a priest, of the basenes and vilenesse of humaine condition, as though man, who in dede is mortal and miserable, and a mortal creature, as you terme him, were not worthy, he could not be made worthy, to offer vp the Immoral Sonne of God vnto his Father.
— Thomas Harding, _ A reioindre to M. Iewels replie against the sacrifice of the Masse_, 1567