The Original Meaning of 'Prestigious'

One day your child comes home from school and informs you that he or she has just gotten some notice for being so prestigious. Should you offer congratulations or punishment? 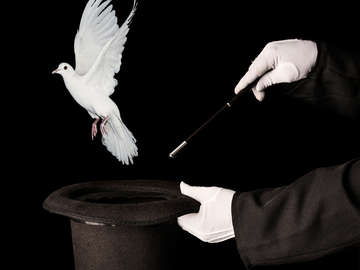 The original meaning of 'prestigious' was “of, relating to, or marked by illusion, conjuring, or trickery.”

Most would lean toward the former, but depending on when this entirely hypothetical encounter took place, it could very easily have been the latter, since prestigious is one of those tricky English words that started out meaning one thing, had a mid-life crisis, and then changed its meaning in a quite substantial fashion.

Prestigious appears to have entered the English language in the beginning of the 16th century, and its original meaning was “of, relating to, or marked by illusion, conjuring, or trickery.” Here are some examples of how the word was employed in the 17th century:

As the prestigious Priests in their Woolfe-like ravening under Romes crueltie … were as deceitfull as craftie foxes; in whose dens were bred such cruel Adders as have ever since carried stings in their tails to oppresse the Church of God, So are those Foxes whelps now become not onely as subtle as their Dammes, but as cruell as their Sires in their subtilties.
—Anonymous, The Bishops Manifest, 1641

As therefore the suspected Witch is tyed to answere vnto any iust doubt, which may bee directly vrged against his or her manifest voluntary action, that is prooued supernaturall: so is a truely doubted Impostor bound to giue satisfaction, for such his ambiguous actions, as doe in likely reason appeare fraudulent, vaine, prestigious, iuggling, couzening, or deceiuing.
—John Cotta, The trial of Witch-craft, 1624

The word comes from the Latin praestigiosus (“deceitful, full of tricks”), and it retained its negative meaning for well over three hundred years. The word prestige travelled a similar path; it was initially used to refer to a conjurer’s trick, and then shifted, in the mid-19th century, to take on the meaning of “reputation.”

It was not until around the beginning of the 20th century that prestigious assumed the meaning that we associate with it today—“having an illustrious name or reputation." While it may be slightly odd for a word to largely retain a single meaning for hundreds of years and then suddenly take on a new one, the fact that it has changed its meaning dramatically is not at all unusual. In fact, our language is spectacularly awash with words that we use in a manner which would be unrecognizable to English speakers of yore.

If you say that you were beguiled by someone, chances are very good that you mean something along the lines of “charmed.” Yet the original meaning of this word was “to trick or deceive.” We often hear people bemoaning the way that younger speakers of the language misuse the word awesome, on the grounds that they are using it to mean “neat-o!” rather than “expressive of awe.” This complaint overlooks the fact that the early uses of awesome were in reference to a somewhat different meaning of awe (it first meant “intense fear, dread”). So while you may think that only such phenomena as Niagara Falls should be called awesome, this would represent a semantic shift for this word from its earlier meaning.

If you start to pay too much attention to all the meanings a particular word has had over the ages, it can be very easy to get confused. We generally are able to navigate the language without overly scrutinizing the possible meanings of vocabulary (we assume, for instance, if someone calls us a bully that they do not mean this as a compliment, and are not intending to describe us as a “sweetheart,” “fine chap,” or one of the other senses that this word formerly had). While it is interesting that prestigious underwent such a shift, there is no real danger that you will confuse anyone into thinking that you meant that you were given a prison sentence if you tell them “I was just recognized by the authorities for being prestigious.”