A Calm, Collected History of 'Uproar'

Sometimes etymology is absolutely shocking, albeit in a quiet, etymological kind of way.

Such is the case with uproar. The word refers, if you will recall, to "a state of commotion, excitement, or violent disturbance," but the roar in uproar has no etymological connection with the roars of lions and tigers and bears. Oh. My. 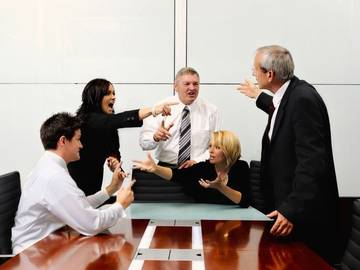 While the word roar comes from the Old English word rārian (and shares an ancestor with the Old High German rērēn, which has the hardly threatening meaning of "to bleat"), uproar is from a Dutch word: oproer. And that word has not an animalistic peep about it.

The first part of oproer, op, means "up," and roer means "motion." In its earliest 16th century English use, uproar carried its Dutch meaning of "insurrection" or "revolt"; an uproar was a "rising up." A few decades after the word's introduction to English, however, uproar was being used with its current meaning, with a process called folk etymology being to blame for both its form and function.

Folk etymology is the modification of words that sound or look unfamiliar into something that makes more sense. 16th-century English speakers encountered this particular new and unfamiliar word and assumed it had something to do with two familiar words. They were, of course, only partly correct. In the earliest English instances of uproar the word was spelled vproure. The first part helpfully matched the spelling of up most fashionable at the time. And eventually the roure part was rendered rore, to match the common spelling of roar.

The word's meaning also shifted to match the known word, and uproar took on connotations of noisiness, settling into its "state of commotion" meaning still retained today.