Why did your great-great grandparents cry when they heard this word?

There are many things about English that appear to be, at best, nonsensical. One does not have to dig very deep into our language before coming up against such vexing queries as “why do we park in the driveway and drive on the parkway?”, “why does inflammable mean ‘capable of being burned,’ and ‘incapable of being burned’?”, and the ever popular “why isn’t there a word for that thing my dog does?”. 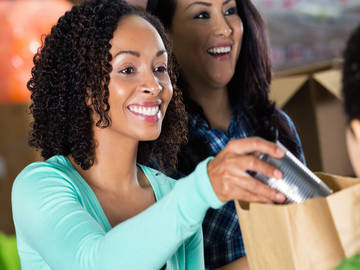 'Donate' used to be considered unacceptable. People really hated it—in much the same way that some people hate words like 'incent' and 'liase' today.

In additional to the English language occasionally taking a break from making sense, our very manner of complaining about the way this language is used often appears to be illogical. Some of us remain angry about usage that has been common for hundreds of years (see: hopefully and literally). And sometimes the guardians of our language wax wroth about things that just don’t seem to matter all that much. Like donate.

You may not have been aware that you were breaking some linguistic taboo of yore whenever you lied to the IRS and said that you had "donated" a certain amount of money every year to some unnamed charity, since we’ve come to accept this word into everyday use. But at the end of the 19th century it was thought improper by quite a few usage guides. That being a more genteel and polite time than the present day, the authors of these guides took care to inform their public of this in a very patient and kindly fashion.

I need hardly say, that this word [donate] is utterly abominable—one that any lover of simple honest English cannot hear with patience and without offence.
—Richard Grant White, Words and Their Uses, 1872

Why, again, should “donate” be preferred to “give”? Does it show a larger soul, a more magnificent liberality, to “donate” than the “give”? Must we donate “the devil his due,” when we would be unusually charitable?
—William Mathews, Words; Their Use and Abuse, 1882

Don’t say donate when you mean give. The use of this pretentious word for every instance of giving has become so common as to be fairly nauseating. Good, plain, vigorous Saxon is never nauseating. If one cannot give his church or town library a little money without calling it donating, let him, in the name of good English, keep his gift until he has learned better.
—Oliver Bell Bunce, Don’t: A Manual of Mistakes & Improprieties more or less prevalent in Conduct and Speech, 1883

What’s so bad about donate? It is a dreaded back-formation (a word that is formed by subtracting a real or supposed affix from an existing longer word), shortened from donation, and this kind of word is occasionally frowned upon. The fact that English has hundreds of perfectly useful and accepted back-formations (such as televise, from television, and escalate, from escalator) has not deterred some people from deciding that a few of them should be stricken from the language.

These days people are mostly focusing their anti-back-formation efforts on specimens such as incent (from incentivize), or liaise (from liaison), but 120 years ago it was quite fashionable to talk trash about donate. Although this word appears to have been in use since the late 18th century it was not until 1870 that alarm bells began to ring when it was used. One of the first writers to comment on it was Edward Gould, in 1870, when he sneeringly observed that Noah Webster had entered the word in his dictionary.

Webster, of course, records the word; and he gravely gives its etymology, “from donare, donatum,” etc.,—as if the prig who fabricated that bit of literature ever saw a Latin Dictionary, or ever heard of the Latin language!
—Edward S. Gould, Good English; or, Popular Errors in Language, 1870

By the end of the 1870s donate was included in the Index Expurgatorius, the list of words complied by William Cullen Bryant, the editor in chief of the New York Evening Post, which were banned from his publication. It remained suspect, if not entirely verboten, for a few decades, but people appear to have taken enough of a liking for the word that it became adopted and eventually accepted; H. W. Howill, writing in A Dictionary of Modern American English (1935) noted that although the British still viewed donate as “a pretentious and magniloquent vulgarism,” with Americans “it has acquired a place in the vocabulary of quite reputable terms.”

You would be hard-pressed to find anyone who still views donate as unacceptable these days. Our peeves about English language use are almost as susceptible to change as is the language itself. No less a peever than Richard Grant White (the fellow who called donate “utterly abominable”) recognized this a few years after calling on people to avoid shortening donation; he found a new word that had supplanted donate as supremely offensive, and his campaign to have us all avoid using it was every bit as successful as was his campaign against donate.

There is a strange was of making a verb and then a participle from a noun in ion, of which the most familiar and offensive example used to be donate, from donation; but now resurrect, from resurrection, has followed it into a certain vogue.
—Richard Grant White, Every-Day English, 1886