Both words mean the same thing, but one of them is bound to confuse most people.

"When cooking over a gas stove, avoid wearing loose, (flammable/inflammable) clothing that could catch fire easily." Which word is correct: flammable or inflammable? 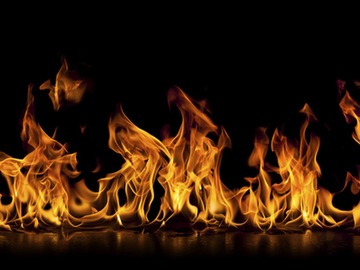 What's the difference between 'flammable' and 'inflammable'?

That would make sense—if inflammable had started out as an English word. We get inflammable from the Latin verb inflammare, which combines flammare ("to catch fire") with a Latin prefix in-, which means "to cause to." This in- shows up occasionally in English words, though we only tend to notice it when the in- word is placed next to its root word for comparison: impassive and passive, irradiated and radiated, inflame and flame. Inflammable came into English in the early 1600s.

Things were fine until 1813, when a scholar translating a Latin text coined the English word flammable from the Latin flammare, and now we had a problem: two words that look like antonyms but are actually synonyms. There has been confusion between the two words ever since.

The True Opposite of Inflammable