'Desire' and 'Consider': A History

We wanted it to be all luminous and starry. Really, we did.

In that simple imperative sentence is a lexical duo: the words consider and desire share a history that points—perhaps, or maybe not—to the stars. 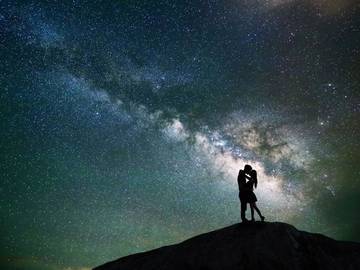 To infinity, or maybe beyond.

Consider is a 14th century import to the language that has meant "to think about carefully" since its earliest days. It's taken on other meanings over the years, but its original meaning is still its primary one. Like desire, it dates to the era known as Middle English, the time when English was taking on many words from Latin thanks to the Anglo-French spoken by the invaders of Norman Conquest fame. To desire something has, since the 13th century, meant to long or hope for something. Over the centuries the verb desire has developed other related meanings as well, but it's this original meaning that's most often called into service: the lover desires the beloved; the cat desires the mouse. The noun desire arrived about a century after the verb to occupy the same basic semantic territory. In its most common use, the noun desire is about the feeling of longing or hoping, or about the thing so longed for: the lover's desire for the beloved; the object of love that is the heart's desire.

The Latin forebears of consider and desire have a stronger family resemblance than their English descendants do. Consider is from consīderāre, meaning "to observe, think about." Desire is from dēsīderāre, meaning "to long for, miss, desire." Both are bipartite, with prefixes that have familiar English analogues: con- means "with, together, jointly," and de- means "from, down, away." Both word's remaining syllables trace to Latin sīder- or sīdus, which is where things get a bit more complicated.

Sīder- and sīdus have historically been understood to mean "star, constellation," with the thinking being that consīderāre and dēsīderāre began as technical terms used especially by those whose business was augury—that is, future-telling through omens and signs—or perhaps seafaring. Later users of consīderāre and dēsīderāre would likely have been only vaguely aware of the celestial roots of the words, much as modern speakers of English don't think about scrolls of parchment when they talk about scrolling through a social media feed.

But etymology as a science is very much alive, and there is a newer theory: that sīder- and sīdus have an older, non-celestial meaning of "mark, target, goal." According to this theory, consīderāre would originally have meant something like "to focus on the goal," and dēsīderāre something like "to miss the mark." (Certainly no one can accuse etymologists of being romanticists.)

Scholars don't dismiss the "star, constellation" meaning of sīder- and sīdus. It's seen clearly in sidereal, meaning "of, relating to, or expressed in relation to stars or constellations," and in that word's near-twin sideral, which functions as a synonym of sidereal and also has an archaic meaning of "emanating from the stars and especially from stars held to be malefic." The obsolete (but nonetheless excellent) siderate means "to blast or strike down (as with lightning)." Its Latin root siderari means "to be struck by a star" or "to be sunstruck."

But consider and desire may have at their etymological cores something more mundane than the heavens, something more suited for a quarterly update than a face upturned in wonder at the night sky. We are, of course, blameless. The fault is in the words themselves, not the stars or the dictionary.