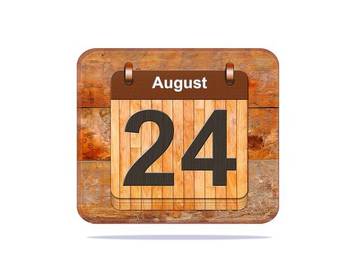 The world of politics drove most major word attention (wordtention?) this week.

Slam-bang was looked up more frequently than it usually is, after Orrin Hatch used the word in a manner which many people thought occupied the middle ground between 'idiomatically awkward' and 'flat-out wrong.'

“I think most people in this country realize that Donald Trump comes from a different world. He comes from New York City, he comes from a slam-bang, difficult world."
— Senator Orrin Hatch, in The New York Times, 22 Aug. 2018

We offer three definitions for slam-bang: "unduly loud or violent," "having fast-paced often nonstop action," and "vigorously enthusiastic." It is difficult to say with certainty whether Senator Hatch intended any of these three senses, or if he intended a more ambiguous meaning.

While we are on the topic of people using words in a semantically adventurous manner, President Trump last week employed gestate in a way that left some of our readers puzzled.

So it's all changing, and when we get those trade deals done properly -- and you know what bothers me? I have people coming to me, some people in Congress, "Sir, can you get this deal done immediately?" I said it doesn't work that way, I don't want to go too fast, the deals not going to be any good if we do that. We've got to take time -- it's got to gestate, right? The word gestate. It's like when you're cooking a chicken. Time, time, turkey for Thanksgiving. My mother would say, oh, eight hours. I said, eight hours? She made the greatest turkey I've ever had. It takes time.
— Donald Trump, quoted in Political Transcript Wire, 22 Aug. 2018

The initial meaning of gestate is "to carry in the uterus during pregnancy," something which egg-born turkeys do not do. The word has a figurative use, "to conceive and gradually develop in the mind"; while it is always possible that a particularly thoughtful or ruminative turkey might gestate an idea this likewise seems unlikely to be the sense intended by the president. Some have speculated that Trump meant to use the word marinate ("to steep (meat, fish, or vegetables) in a marinade.") We have no opinion on this matter.

Other political news influenced many of our lookups this past week. Blowhard attracted a considerable amount of attention after Rudy Giuliani used the word in a tweet directed toward former CIA Director John Brennan.

To John Brennan: Today President Trump granted our request (Jay Sekulow and me) to handle your case. After threatening if you don’t it would be just like Obama’s red lines. Come on John you’re not a blowhard?

A blowhard is "an arrogantly and pompously boastful or opinionated person." The English language is rich with synonyms for this kind of person, including (but not limited to) braggadocio, fanfaron, puckfist, and cacafuego. For those of you who are interested in both etymology and scatological humor (and really, who isn't?), cacafuego does indeed appear to come from combining the Spanish words meaning "to void as excrement" and "fire" (it was the name of a Spanish vessel captured in 1579 by Francis Drake).

Given that so much attention was focused on words from political news this week's antedating likewise relates to this topic. The word holdout received considerably more attention last week than it usually does, as much of the news coverage of former Trump campaign manager Paul Manafort's verdict described one juror with this word.

Paul Manafort, President Trump’s former campaign chairman, would have been convicted on all 18 charges of financial fraud but for one holdout juror, who forced a mistrial on 10 counts, another member of the jury said on Wednesday.
— Matthew Haag and Sharon LaFraniere, The New York Times, 23 Aug. 2018

We define holdout as "one that holds out (as in negotiations); also : an instance of holding out," and our earliest evidence for this word had come from 1908. However, we now see that it dates back to the middle of the 19th century, at least. An article from the New York Daily Times, about a labor dispute, uses the word to refer to striking workers who had refused to accept employment at a reduced rate of compensation.

There were, however, about three hundred who accepted the reduced terms. These had scarcely begun digging before the indignant "hold-outs" rushed upon them with a grand yell, and drove them off.
— The New York Daily Times (New York City, NY), 4 Jul. 1857