Tbh: To Be Honest, the Meaning is Perfectly Clear

Informal written communication is littered with abbreviations that to the uninitiated can be completely opaque. But these abbreviations say so much so quickly that once the initiation has occurred the path to adoption is hindered only by whatever degree of disdain one might feel for such expediencies. The abbreviations are, tbh (er, that is, "to be honest"), so very useful that it can be difficult to decide to eschew them just because they lack a certain elegance. Even the best writers use them informally, fwiw (uh, "for what it's worth"). 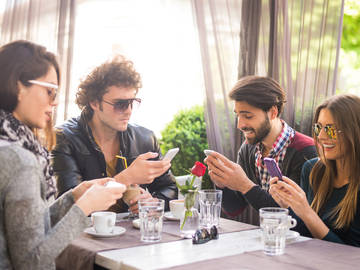 Though 'tbh' ("to be honest") is well established in informal communication, it appears less frequently in published, edited text. That's why it isn't in the dictionary.

The problem, of course, is when one's reader is among those unfortunate uninitiated. If the wielder of the opaque abbreviations doesn't know (or doesn't care) about the reader's uninitiated status, the reader has to either guess at the meaning or wander away to discover it. Not at all desirable, imo ("in my opinion"). (Note: If we wanted to express either an amount of diffidence or a flat-out rejection of diffidence, we'd use imho or imnsho: "in my humble opinion" or "in my not so humble opinion," respectively.)

Btw (that's "by the way"), abbreviations like these are not a new phenomenon. We have evidence of OMG ("oh my God") dating to 1917, and FYI ("for your information") dates to at least as early as the 1940s. But it is certainly true that computers (including the ones that are the phones in our pockets) have led to the creation and dissemination of scads of new ones. Afaik ("as far as I know"), most of the other abbreviations mentioned so far date at least to the early days of Usenet, which began in the 1980s.

And yet, most of these abbreviations have yet to be entered into our dictionaries. Why is that, you might ask? Well, lexicographers encounter these abbreviations in the same way everyone else does—that is, in informal written communication, and not, as a rule, in the usual environs of good dictionary candidates (i.e., published, edited text like newspapers, magazines, and books). To qualify for entry, abbreviations must demonstrate what any definiendum demonstrates: evidence of an established meaning in sustained, widespread use. That evidence is simply harder to collect when it's concentrated in the texts sent between you and your BFF.

That's not the only place they exist, though, and afaic ("as far as I'm concerned"), these are candidates worthy of consideration.