It doesn’t require balancing a ball on your nose.

Sealioning is a harassment tactic by which a participant in a debate or online discussion pesters the other participant with disingenuous questions under the guise of sincerity, hoping to erode the patience or goodwill of the target to the point where they appear unreasonable. Often, sealioning involved asking for evidence for even basic claims. The term comes from a web comic depicting a sea lion engaging in such behavior. 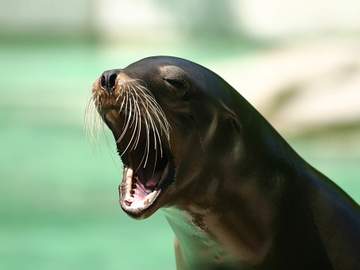 Where are you going?

In the culture of internet discourse, the term sealioning has emerged for a situation that might be familiar to anyone who has ever been dragged into an argument with a stranger on social media or in the comment section of a news article.

Sealioning refers to the disingenuous action by a commenter of making an ostensible effort to engage in sincere and serious civil debate, usually by asking persistent questions of the other commenter. These questions are phrased in a way that may come off as an effort to learn and engage with the subject at hand, but are really intended to erode the goodwill of the person to whom they are replying, to get them to appear impatient or to lash out, and therefore come off as unreasonable.

If you’ve been sealioned in real life or online, you’ll feel like every argument is cyclical. You make a point, only for the sea lion to storm in asking for proof of what you said. Your expertise and knowledge are denied. It’s your job to go out of your way to convince them, even though they’re the one who questioned you in the first place.
— Jessica Lindsay, Metro UK, 5 July 2018

Even when sealioning is recognized, responding suitably can be difficult. There are no clear norms for handling it—advice tends to simply suggest "Don’t feed the troll." While this may allow an individual to navigate the moment, it doesn’t address broader effects on trust and learning.
— Amy Johnson, Perspective on Harmful Speech Online, August 2017

Sealioning is when an uninvited stranger pops into your conversation and peppers you with unsolicited and insincere questions. The sealion politely demands evidence for even the most mundane or self-evident statements and insists that you justify your opinions until he's satisfied—which he never is, since he's asking questions in bad faith. The sealion is basically the self-appointed "good cop" in an interrogation for a crime you didn't commit.
— Anita Sarkeesian, Marie Claire, 20 Feb. 2015

The origin of the term sealioning is traced to a webcomic called Wondermark by David Malki. In a strip called "The Terrible Sea Lion," which was published on September 19, 2014, a character expresses a strong dislike for sea lions, only for a sea lion to appear suddenly and pursue the character relentlessly—to the point of following her and her partner into her bedroom—insisting that she justify her beliefs.

The sea lion association caught on as a name for the phenomenon that Malki identified, one familiar to readers but that otherwise did not have a settled name. Now the sea lion is often seen as a meme deployed when attempts at the tactic are called out by other users: 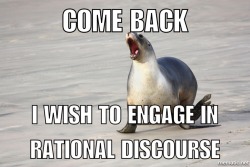