What does it mean to be an egg on Twitter?

What are eggs, and why are Twitter users muting them?

As with avian twitterers, all users of the microblogging service Twitter begin as eggs.

On Twitter, an egg is a person whose profile picture is a simple image of an egg. The image is the default image; it means that the user hasn't chosen a picture to accompany their profile. 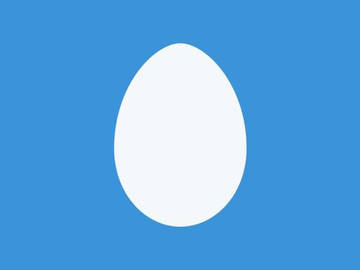 'Egg' has become a kind of shorthand for "Internet troll," though the avatar can simply indicate that a user is new to Twitter or inexperienced with the platform. Twitter recently made news by adding a feature that allows users to mute tweets coming from egg accounts.

There are various reasons why someone might be an egg. They're new to Twitter and haven't bothered to choose a picture; they're—gulp—new to computers in general and can't figure out how to change the default icon; they want to be incognito. Those in the last category may wear their anonymity as an innocuous cloak, or they may crouch wickedly under it in true troll form.

Twitter is working to correct what many have criticized as a weak response to trolls, but fear of trolls is widespread enough to instill a good case of egg-phobia (ovaphobia has been proposed as a name for a fear of literal eggs, but that word is not yet established) in some:

The egg icon was not the original default profile image for Twitter users. According to writer (among other things) Bob Leggitt, the first Twitter users, those who signed on in March of 2006, had a figure in silhouette as their default profile image. That image was followed by an emoticon typically used to express confusion: o_O. The confusion emoticon was in place from 2007 and available till early 2011, though in 2009 a cute white bird with a colored background (there were a number of possible shades) became the default.

The egg we see now was adopted in late 2010. It of course immediately became a topic of tweets:

It wasn't long until people who had eggs as their profile pictures were being referred to (by themselves and others) as "eggs":

Fed up being an egg; how hard can it be to get the bloody picture on?

It's an image that plays on the platform's bird theme; an egg is, in theory, a user who hasn't yet fully fledged—though eggs can certainly tweet, and just how fledged eggs are could be passionately debated.

Both of these uses of egg are old; as far as we can tell, they date to the 13th and 14th centuries, respectively. (The other verb egg, meaning "to cover with egg" or "to pelt with eggs," is much newer; our current evidence dates it only to the 1830s.)

By the 1600s, and by the likes of Shakespeare, the noun egg was being used to (unkindly) refer to a young person; in Macbeth such an egg meets a terrible end; he's MacDuff's son, and he is murdered by his insulter, who also calls him a "young fry of treachery." In the same century egg also came to refer to something from which another thing (and usually a bad one) emerged. Both uses existed into the 19th century:

And in the course of their conversation Mrs. Lyndsay contrived to drop into his mind the egg of a project which she took a later occasion to hatch under her plumes of down.
Edward Bulwer-Lytton, What Will He Do With It, 1850

Both uses engage with the egg as metaphor, as the modern Twitter-specific use does as well.

Currently, this newest use of the word egg seems to be limited to the realm of Twitter. We'll be watching to see if it shows signs of expanding its territory, as another word we're watching has been doing.