The whole truth about a confusing idiom.

Say your piece and hold your peace are separate idioms. "Say your piece" refers to stating your opinion, or your "piece" or "part" of the conversation. This is often confused with "hold your peace," which is often associated with marriage objections and refers to remaining silent and peaceful. Frequently, even in professional writing, the confusion is apparent and written as "say your peace."

Let's not bury the lede (or is it lead?) here. To say your piece is to express your opinion or point of view about something. 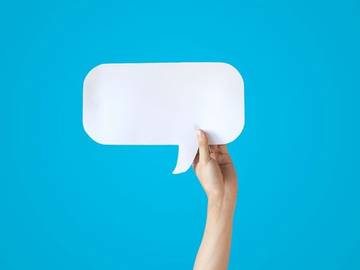 Don't go to pieces on us.

Whether Kaepernick should have a job is complex: While with the San Francisco 49ers last season, he became a lightning rod for controversy after kneeling as the national anthem was played. But it seems we often respond to such situations with hypocrisy. Whether we think athletes or entertainers have the right to say their piece often depends on how we feel about what they say.
— Lane Filler, Newsday, 6 Sept. 2017

Having said his piece on North Korea on Tuesday, Trump appeared for a couple of days to have moved on. Wednesday and Thursday, before renewing his rhetorical volleys at Kim, Trump had a new target in his sights, his party's leader in the Senate, Mitch McConnell.
— David Lauter, The Los Angeles Times, 10 Aug. 2017

This sense of piece is defined in the dictionary as "opinion" or "view." Many other senses of the word suggest a part that, when joined with others of like kind, makes a whole: a piece of pie; a jigsaw puzzle piece.

If you think of a discourse or conversation as something to which many people contribute, then each of those people has a piece.

However, this doesn't stop some English speakers—as well as professional editors—from interpreting piece as its homophone peace:

It was one of the most anticipated acceptance speeches in wrestling history, but Warrior, famous for his face paint and unending energy during his ring entrance, didn't say anything crazy or point fingers directly at his naysayers. Instead, he said his peace on the negative DVD the WWE made about him in 2005 -- "It broke my heart. ... The DVD was just wrong. It was hurtful." -- and his bad reputation -- "I was a good guy. I am a good guy."
— Gene Guillot, The New Orleans Times-Picayune, 6 Apr. 2014

Occasionally an editor will notice the substitution of peace for piece and note it with a [sic] in running text:

She [Elizabeth Poe] has also taken to defending herself in her Facebook comments, where, as in many online forums, the conversation has largely turned hostile. "Please, this is not going to be used as a platform to hash out your beliefs v. my beliefs. I said my peace [sic]," she wrote. "I am sorry that you don't agree with my policy. I am certainly willing to live with my decision."
— Eric Levenson, CNN.com, 26 Jan. 2017

The use of peace in place of piece in this idiom is a somewhat common occurrence that appears even in professionally edited text. The cause is likely a result of interpretation. If you've said all you have to say about a subject and are done talking, after all, you would presumably remain quiet on the subject afterward. As demonstrated by the David Lauter example above, the phrase comes with a suggestion of finality. One might then interpret the act of saying no more as "saying one's peace."

There also exists the possibility of the conflation of say one's piece with another established idiom, hold one's peace, such as you might hear an officiator say at a wedding. The officiator might offer a chance for anyone present to voice their objection to the nuptials: "If anyone here believes this couple should not be married, let them speak now or forever hold their peace." Hold one's peace here means "to keep silent," because the time for stating one's objection to the marriage will have passed. But it's a distinct phrase from say one's piece, with the focus on silence rather than what is being said.

And that's all we have to say about that.