A lede is the introductory section in journalism and thus to bury the lede refers to hiding the most important and relevant pieces of a story within other distracting information. The spelling of lede is allegedly so as to not confuse it with lead (/led/) which referred to the strip of metal that would separate lines of type. Both spellings, however, can be found in instances of the phrase.

In journalism, the lede refers to the introductory section of a news story that is intended to entice the reader to read the full story. It appears most frequently in the idiom bury the lede. 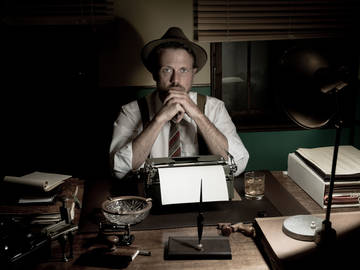 Our earliest examples of 'lede' come from the 1970s, around the time that Linotype machines began disappearing from newsrooms.

You often see a periodical or news organization accused of burying the lede when the important elements of a story are tucked down into the details, obscured by less important, distracting information:

We're not going to bury the lede here: Bob Ross' hair was actually straight. Just ask his longtime business partner, Annette Kowalski, who knew Ross better than anyone — he had just gotten out of the Air Force, and was unsuccessfully trying to make a living as a painter, she says. "He got this bright idea that he could save money on haircuts. So he let his hair grow, he got a perm, and decided he would never need a haircut again," Kowalski explains.
—Danny Hajek, NPR.org, 29 Aug. 2016

The big box-office story of the weekend isn’t exactly, ahem, strange. So let’s bury the lede for a second and start with some good news: Small movies are doing gangbusters business in limited release.
—A. A. Dowd, The A. V. Club, 7 Nov. 2016

Why is it Spelled "Lede"

The spelling lede is an alteration of lead, a word which, on its own, makes sense; after all, isn't the main information in a story found in the lead (first) paragraph? And sure enough, for many years lead was the preferred spelling for the introductory section of a news story.

So how did we come to spell it lede?

Although evidence dates the spelling to the 1970s, we didn't enter lede in our dictionaries until 2008. For much of that time, it was mostly kept under wraps as in-house newsroom jargon.

Once, Al Marlens, the assistant managing editor, told one of the cleaning men to walk up to me and ask to see my lede, “not lead,” a newsie slang for the first sentence of a story.
—Myron S. Waldman, Forgive Us Our Press Passes, 1991

Spelling the word as lede helped copyeditors, typesetters, and others in the business distinguish it from its homograph lead (pronounced \led\ ), which also happened to refer to the thin strip of metal separating lines of type (as in a Linotype machine). Since both uses were likely to come up frequently in a newspaper office, there was a benefit to spelling the two words distinctly.

William Safire, who knew a thing or two about newsrooms, wrote in his New York Times "On Language" column in 1990, "Wouldn't it be easier if the noun for the metal were spelled the way it sounded (led, to rhyme with dead) and the noun for the beginning of a newspaper story were spelled the way it is pronounced (lede, or leed, to rhyme with deed)?"

Others have been less than willing to embrace the new spelling. At The Awl, founder Choire Sicha tore out at those who use lede like it's an affectation:

You schmucks who use ridiculous journo-terms make me crazy! Finally, someone is willing to speak out against the use of “lede” in public. Because, ha ha, sucka, there’s no reason for it! (Plus, MOST OF YOU ARE JUST BLOGGERS.)
—Choire Sicha, The Awl, 19 Sept. 2011

That "someone" was Howard Owens, a writer who has speculated that the flourishing of lede in the 1970s is ironic given that Linotype machines were starting to be phased out from newsrooms around that time. Owens attributes the fondness for the spelling to nostalgia, calling it "an invention of linotype romanticists, not something used in newsrooms of the linotype era."

Despite the acknowledgment of lede by Safire and others, and its subsequent use by journalists and non-journalists alike, phrases employing the traditional spelling of lead still find their way into print:

But because I didn’t want Marshall’s piece to get lost in a big evening, I’ve buried the lead: The New Music Group was followed by a late-night appearance of wild Up, with Christopher Rountree conducting his increasingly impressive young ensemble in three more premieres
Mark Swed, Los Angeles Times, 2 Oct. 2016

Needless to say, don't want to bury the lead, but I think there could be a second day of down for Apple (AAPL) -- said so myself in a video I did with Jack Mohr (see above) -- but if you don't own any, by all means don't let me stop you from buying some.
Jim Cramer, TheStreet.com, 26 Oct. 2016

This is sure to become one of those longstanding usage debates that will have its hard-liners on both sides, and perhaps reveal a little bit about the writer's familiarity with the news business.