Its latest sense has been in use for over a century

Sometimes a word will change meaning in a glamorous fashion, as when a famous writer grabs it by the scruff of its neck, shakes it a few times, and through majestic force of will makes it take on a new sense (this doesn’t happen as often as we like to think it does). Other words take on new meanings in less-glamorous ways, such as when people simply misinterpret them because of how they look.

For hundreds of years the main meaning of fruition was “the pleasurable use or possession of something.” But eventually enough people seemed to reason that any word that begins with these five letters must have something to do with fruit, and so the word took on the additional meaning of “the state of bearing fruit.” And the word internecine initially only meant “marked by slaughter” until Samuel Johnson misinterpreted the prefix inter- as meaning “mutual” and gave birth to the word’s current meaning “of, relating to, or involving conflict within a group” (although inter- usually means “between” or “mutual” it may also be used to indicate completion of an action).  Similar to these two words is the case of restive. 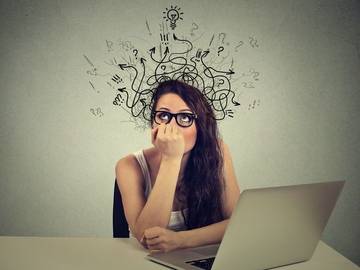 The word has gone from meaning "stubborn" to "fidgety" in the last century and a half.

Based on the fact that it is an adjective beginning with rest-, people will occasionally assume that the word is the same as restless. Although there is enough semantic overlap that such confusion is understandable, these words are distinct from each other.

Restive came into English use in the 15th century, descended from the Anglo-French rester, meaning "to stop, resist, or remain.” Its initial meaning was “stubbornly resisting control or guidance; obstinate in refusal,” and for some time the word was primarily applied to animals such as horses.

Nowe if wee doe so; then must that which is spoken in the two & thirtith Psalme bee practised vppon vs, to wit, that God will deale with sturdie and hardharted folkes as with restiue horses, and madde moyles.
— Jean Calvin, The Sermons of M. Iohn Caluin, 1583

Over the next few hundred years restive had a number of other meanings (such as “inflexible,” “sluggish,” and “persistent”) which were closely related, and the word was often found used in reference to people as well as animals. In the middle of the 19th century this semantic drift began to include the meaning “marked by impatience or uneasiness.”

At nine o’clock the next day, however the man appeared, and stocking full after stocking full was carried up and emptied on the table, until severn thousand was counted.—The merchant, somewhat restive, but honourably caught, took the silver, gave a check for the amount, with seven per cent added….
— The Middlebury Register (Middlebury, VT), 2 Dec. 1845

He did right to preach to women: men would not have listened to him. As it was, Miss Joy Blewins, and Mrs. M’Murphy, were restive.
— George Meredith, The Ordeal of Richard Feverel, 1859

Although the oldest sense of restive (“balky”) has not died out completely, it is overshadowed by the more recent one (“fidgety”). There are still usage guides which recommend against using restive in this modern sense, but there is well over a century and a half of evidence of such use, by writers of all levels. The modern senses of fruition and internecine are similarly fine. If you're among the restive (earlier meaning) ones who fight against adding new senses based on incorrect usage, we apologize if this news makes you feel restive (newer one).