Some words are tricky and confusing because they bear a resemblance to another word in spelling or sound. Other words prove difficult due to possessing enough similarity of meaning that they are easily confused with one or more near synonyms. Still others give trouble through their relative obscurity; speakers find that they have just enough knowledge of a word to put it in the right setting in the wrong way. Purview manages to occasionally be each of these things. 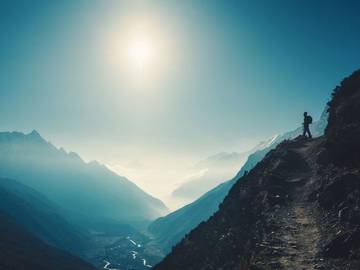 Everything you see here ... is within your scope of vision.

This noun came into our language from the English legal statutes of the 13th and 14th centuries. These documents were written in Anglo-French (after the Norman conquest of England in 1066), and often began with the phrase purveu est (“it is provided"). We have retained the legalistic meanings of this origin (“the body or enacting part of a statute” and “the limit, purpose, or scope of a statute” are among the earliest meanings of purview) along with newer senses such as “range of vision, understanding, or cognizance” and “the range or limit of authority, competence, responsibility, concern, or intention.”

Purview is occasionally confused with preview, which is understandable, given the orthographic similarities between the two words. Perhaps because of this confusion, we also see the word used as a synonym of precede.

The rocky transition between seasons purviewed warmer, more relaxed weather performances by the third month of the year.
— The Post-Star (Glens Falls, NY), 7 May 1989

You will be happy to know that the misuse of purview for preview works in reverse, and there is plenty of evidence of people using preview to mean “range of authority.”

Craven said the other 29 demands made by the prisoners “require implementation by changes in the law or actions that are outside my preview.”
— Sacramento Bee (Sacramento, CA), 13 Nov. 1970

”This is well within our preview,” he said. “We have a right and an obligation as city officials to make sure people who come before us are being truthful.
— Quad-City Times (Davenport, IA), 18 Sept. 2003

When we turn to the area of semantic confusion there are a wide range of words that purview may easily be confused with. And given that one of the more common meanings of this word is concerned with matters of “competence or authority” it can be rather embarrassing to use the word in a way that undermines either of these two things; boldly misusing purview as you seek to establish your purview is the lexical equivalent of entering the meeting with toilet paper stuck to your shoe.

So do you mean to refer to your purview, or should you instead be using bailiwick, remit, jurisdiction, or ambit? There is significant overlap in meaning between man of these words, but not all are interchangeable.

Bailiwick can refer specifically to “the office or jurisdiction of a bailiff” (which may be defined as “an official employed by a British sheriff” or “a minor officer of some U.S. courts”), but also has a generalized meaning of “the sphere in which one has superior knowledge or authority.”

Remit has a wide range of uses and meanings (especially as a transitive verb); among its noun senses is “an area of responsibility or authority.” This use is chiefly found in British use, and unless you are British yourself, or attempting to appear so, it is not recommended that you substitute remit for purview. Ambit may mean “a sphere of action, expression, or influence,” but also is often used to describe “the bounds or limits of a place or district.”

Jurisdiction has at least one sense (“the limits or territory within which authority may be exercised”) that is quite close in meaning to purview. The word is often enough used in reference to “the power or right to exercise authority,” that you may wish to consider whether you are being politic in saying “my jurisdiction” rather than “my purview.”

In present-day English purview is most often used to refer to the sphere or scope of responsibilities, concerns, or authority a person or entity has; especially if one is describing the boundaries of these responsibilities or concerns. If you're talking about whether the right to fire someone (who, for the sake of argument, both embezzles and microwaves fish in the office) is within, outside, under, or beyond the range of your abilities you are talking about your purview. If you are now daydreaming about how much nicer things will be at work after this person is out, that is a preview.