Regarding body positioning, prone generally means lying face down, supine means lying face up, and prostrate means stretched out lying flat, often submissively. The words also have other uses where prone can mean "having a tendency," and connotes vulnerability, while supine suggests a "willful inactivity or lethargy."

Meanings of Prone and Supine

In general use, prone and supine indicate contrasting positions of the body: a person lying prone is facing downward while a person lying supine is face up. 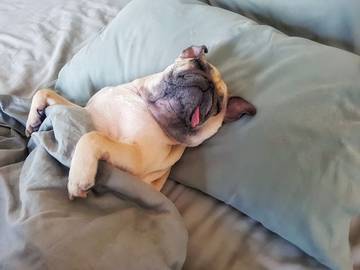 If you didn't already know this distinction, you can sometimes infer it from clues in the context:

Just now, she chose to drink from the creek, lying prone on the ground, her face half-buried in the water, and this, not because she was thirsty, but because it was a new way to drink.
—Frank Norris, The Octopus: A Story of California, 1901

You could visit the aft cabin by lying supine on a wheeled cart and pulling yourself along an overhead rope through a tunnel 85 feet long and two feet in diameter.
—Daniel Ford, Air & Space, April/May 1996

In some instances, even without contextual clues, one can make an educated guess whether the person is face up or face down:

Her body had to be positioned prone on the operating table, her forehead resting in a sling, her shoulders held by crutchlike supports.
—Barbara Harris, Cosmopolitan, August 1972

I too have been prone on my couch this week, a victim of the common cold
—Flannery O'Connor, letter, 20 Mar. 1961

And in yet other times, prone is used to describe one who is quite clearly facing upward:

He lies prone, his face to the sky, his hat rolling to the wall.
—James Joyce, Ulysses, 1922

Both prone and supine also have meanings that have nothing to do with physical position. Supine, with its image of one lying comfortably idle, shows use in the sense of "mentally or morally slack" or "permissively inactive":

Some have called him Florida's first king, though that was before budgets tightened and the legislature, formerly as supine as Huey Long's once was in Louisiana, began showing signs of independence and even resentment toward him.
—David Margolick, Vanity Fair, July 2001

He despised the farm lobby, for example, for its mastery over a supine Congress that in the early days of the past century regularly enacted costly favors for farmers while extolling special virtues it attributed to tillers of the soil ...
—Russell Baker, The New York Review of Books, 11 Nov. 2010

Prone is used in the sense of "having a tendency or inclination," as in "prone to worry" or "accident-prone." This usage is similar to such words as apt, liable, or likely (as in "apt to be late"), but in many instances prone implies a vulnerability to attack or damaging influence, much like one who is lying face down and cannot see what is approaching:

With all the rain we've had recently, my roof is beginning to leak and my basement has become prone to flooding.
—Marc Fitten, The New York Times, 21 Feb. 2010

And then there is prostrate, which means "stretched out with face on the ground in adoration or submission" or "completely overcome and lacking vitality, will, or power to rise."

Added to the mix are the cameras that broadcast the daily Mass (that, pace Mahony, is said in Latin and accompanied by nuns fully prostrate behind the grille but not beyond the cameras, which are mounted on the walls like a series of surreal, postmodern Stations of the Cross).
—J. V. Long, Commonweal, 14 Aug. 1998

Ordinary Munchausen syndrome (a term coined in 1951) is characterized by a morbid desire for medical attention: its victims induce symptoms in themselves for the thrill of arriving prostrate in the emergency room and being swarmed over by doctors and nurses shouting complicated instructions.
—Larissa MacFarquhar, The New Yorker, 9 Mar. 1988

By 1978 John Lennon had ceased to resemble himself.... Totally prostrate, John couldn't even raise his head to look at the TV screen; instead, he employed a pair of trick glasses with prism lenses that enabled him to watch while lying flat on his back.
—People, 22 Aug. 1988

Angola, whose economy is prostrate after a decade of civil war and foreign invasions, depends on oil and oil products for about $2 billion--or 809 percent--of its foreign exchange earnings.
—James Brooke, The New York Times, 5 Jan. 1985

So while prone, supine, and prostrate have specific meanings with regard to position, they also come with situational connotations in many cases: prone suggests exposure or vulnerability; supine connotes a position of willful inactivity; and prostrate often describes a giving in to forces of lethargy or submission.

In summary: A person lying prone is facing downward. A person lying supine is face up. Prostrate can be applied to someone either face up or face down: a prostrate person is either stretched out with their face on the ground in adoration or submission, or simply lying flat.