Despite their being only a letter apart, try not to confuse preposition and proposition. A preposition is a word that combines with a noun phrase to form a phrase which usually expresses a modification or predication. Some prepositions are at, of, in, to, from, and by. Proposition can mean "something offered for consideration" or "something to be believed or doubted." One can also "proposition" another person, as in, make a proposal. 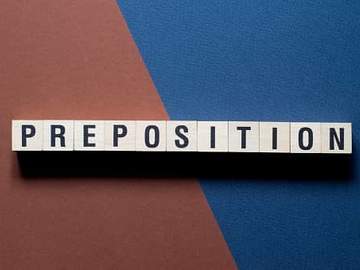 Stay tuned for a simple mnemonic.

Any time one comes across two long words that have but a single letter of difference they are likely to be mistaken for each other. It does not matter much whether the meanings are similar; orthographic similarity is enough to occasion confusion. An example of this is found with preposition and proposition.

Preposition is the simpler of these words, insofar as it has fewer shades of meaning. We define it as “a function word that typically combines with a noun phrase to form a phrase which usually expresses a modification or predication.” Some common examples of prepositions are at, by, for, from, in, of, on, to, and with. Preposition may be traced to the Latin praeponere, meaning  “to put in front,” a fitting etymology, as they usually come before the noun or noun phrases that they introduce or give information about. Please note that in spite of this etymological information, and in spite of the fact that prepositions typically are pre-positioned, there is nothing wrong with ending a sentence with this kind of word.

Proposition is somewhat trickier to explain, as the word has a much wider range of meanings. This word also came into English from Latin (from proponere, meaning “to display, declare, propound”), and has been in use since the 14th century. Among the meanings of proposition are “something offered for consideration or acceptance,” “an expression in language or signs of "something that can be believed, doubted, or denied or is either true or false,” and “something of an indicated kind to be dealt with.” Proposition can also function as a verb (something that preposition rarely does), with the meaning of “to make a proposal to” (this use is especially found in the sense of “to suggest sexual intercourse to”).

It is not difficult to find examples of these two words being mixed up in edited prose.

Those who believe that it is always wrong to split an infinitive, end a sentence with a proposition, or start with a conjunction are in a linguistic straitjacket and unable to communicate as well as they might.
— John Foster, Effective Writing Skills for Public Relations, 2008

Tricks for Keeping Them Separate

If you find it difficult to distinguish between these words there are a number of simple mnemonics one can come up with. Many people may choose to try to remember that some senses of proposition are synonymous with propose and proposal, and that preposition is usually found in an etymologically apt spot, the pre-position.