Perhaps you've heard a noise at night when everyone in the house is asleep or when you're the house's sole occupant, watching a horror flick. There's no obvious reason for how the sound was made, so you try to rationalize it as the cat knocking something over, but then realize she's right next to you. You then convince yourself that it was a bang from the furnace kicking on. But you're not fully convinced, and as your imagination takes over (influenced by the movie you're watching alone in the dark) your thoughts drift to the possibility of a supernatural being as the noisemaker. It could be an evil poltergeist, you think, or Casper the Friendly Ghost—either way, it's a spooky situation and your imagination isn't helping you figure out what exactly is going bump in the night. 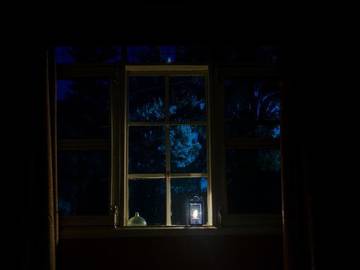 Earliest Use of "Go Bump in the Night"

Such experiences are behind the formation of the expression "things that go bump in the night," which refers to ghosts or other supernatural beings that are believed to be the source of frightening, unexplainable noises heard at night (that often sound like something being struck or bumped).

Each movie follows the same premise involving a millionaire who invites five strangers to a birthday party for his wife. The strangers are promised a large amount of money if they can survive the night in the titled house on haunted hill. But when things go bump in the night the group realizes no one is safe.
— Kristen Lopez, SlashFilm, 23 Oct. 2019

Known print use of the expression dates to the late 19th century; however, there is reason to believe that it is even older since early 20th-century writers were using it with familiarity.

They haunt the places of the dark, where there are were-wolves and goblins and "things that go bump in the night."
— W. M. Letts, The Living Age, July – September 1914

The commonly cited source of its origin is a British prayer. English poet Alfred Noyes includes it in his 1909 anthology The Magic Casement:

And if that the bowle of curds and creame were not duly set out for Robin Good-fellow, why, then, 'ware of bull-beggars, spirits, etc.

From Ghoulies and Ghoosties, long-leggety Beasties, and Things that go Bump in the Night, Good Lord, deliver us!

(Maybe it's a good idea to put out some food, such as a "boologna" sandwich or a dish of "spooketti," like we do for other nighttime houseguests?)

"Bump" as an Adverb

This adverbial use of bump (the word modifies the verb go) is not commonly encountered now except in "things that go bump in the night." It is first attested in the early 18th century with the meaning "with a sudden collision" and derives from the verb's "to collide with" sense, as in "the car bumped the pole." Some notable authors have used the adverb, often humorously, including: Daniel Defoe ("to run bump a shore upon Scilly"); Charles Kingsley ("as he came bump, stump, jump, down the steep"); and author of the Winnie-the-Pooh books A. A. Milne ("here is Edward Bear, coming downstairs now, bump, bump, bump, on the back of his head").

Things in the expression gives name to the unknown beings sounding in the darkness. The Old English word is cognate with a family of Germanic words having senses referring to a deliberative meeting or assembly as well as the matter or case deliberated thereat. The "entity" and "being" senses of thing have a distant connection to the Germanic derivatives. For whatever exists but is incapable of being identified is usually given some thought in an attempt to give it a name. A specific sense of thing in reference to a supernatural or monstrous being was invoked in the early 19th century.

Thou unknown, terrible, and indistinct, / Yet awful Thing of Shadows, speak to me!
— Lord Byron, Heaven and Earth, 1822

Indeed, hearing an unexpected noise in the dark is scary. Sometimes the things that go bump in the night are not quickly identified, and thoughts of supernatural encounters of the ghostly or monstrous kind begin to enter your mind. One consolation is that things that go bump in the night don't stay long—they make a sound, or two, or three, and leave. If you hear more, you might have to make a frantic dash toward that light switch and see what it is. The furnace could be on the fritz.