Plogging is a term invented by Erik Ahlström referring to the act of picking up trash and litter while jogging. It is a portmanteau of the Swedish term plocka upp, which means "to pick up," and jogging. 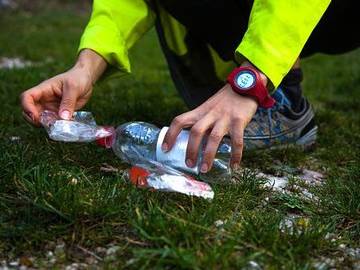 Picking up litter on jogs, runs, hikes, walks, and bike rides is not a duty but an obligation for some of the environmentally conscious. Of course, not every person traversing the paths of public space shares the same unhesitating passion for keeping the environment clean—it can be pretty gross, especially without gloves—but is there a word for stopping for trash along the way?

In 2016, an outdoorsy Swede by the name of Erik Ahlström began changing this thinking in those who regularly passed by litter during routine cardio workouts and who felt an itch, which they did not actively scratch, to pick it up with the promotion of plogging. Plogging refers, specifically, to the activity of picking up trash while jogging, and its name is a portmanteau of the Swedish term plocka upp, meaning "to pick up," and English jogging. In Swedish, the activity goes by plogga, a combination of plocka upp with the language's word for "jog," jogga. The objective of plogging is to exercise while making the area in which you are doing so litter-free. Here's an early quote of the word in English text:

Plogging means, pick up and run. Here, you pick up any trash you see on your way, put it in a trash bag, and run. Sweden has people running with trash bags, and it's slowly catching up globally. Called Plogging, the Swedish word is formed by combining 'pick up' and 'run.' And with the new trend, trash bags are what people are picking up and running. You see trash on your way, you pick it up. In all, it's good for your body, good for your mind and good for the environment around you. Though it started off with Sweden, it is catching up all around the world. Instagram is buzzing with the new plogging hashtag. If you look it up, you can see ploggers from all over the world sharing their routes, and their trash bags.
— BGR India, 31 Jan. 2018

Plogging is a simple activity. All a plogger needs, besides a concern for the state of the environment and the ecosystem, are suitable jogging gear, the desire to get outside to jog, and the ability to stay on task—that being the scanning for and picking up quickly (to keep up the heart rate) litter while jogging. Gloves are optional but recommended, and so are bags. Although a majority of ploggers take a bag for their discoveries from home—preferably a biodegradable or reusable one that is convenient to carry—others begin plogging without one, betting they will discover one along the way. There are also some who find their hands, pockets, or waistbands will suffice, knowing their small collections of trash held on their persons are making a difference.

At the end of a plog, the plogger might—or should—sort the collected trash into recyclable and nonrecyclable piles and dispose of them accordingly. This act gives the plogger a quantifiable sense of accomplishment. Before disposal, the plogger might take a pic of their collection, and maybe of a separate curiosity or two or three that they found, to proudly share with other ploggers, as well as curious outsiders, on social media. They have made a difference in the landscape—they have a reason to take pride.

If you're a regular outdoor exerciser, think about becoming a plogger, or a plalker (a person who picks up litter while walking) or a pliker. Pliker is the name for either a hiker or a biker who picks up litter. If pliking on bike, a trash grabber is recommended as well as panniers, a cup in a bottle cage, or a secure pack or container of some sort for litter instead of a dangling garbage bag that might get caught in the cycle's moving parts.

Plogging is becoming increasingly popular after it was initiated as an organizational activity in Sweden around 2016. So [Mike] Delion decided to combine his walking with picking up garbage and call it plalking.
— The Waterloo Chronicle, 28 June 2018

While the act of plogging might be new for joggers, hikers have been "pliking" for as long as litter bugs have been polluting their trails. So it was only a matter of time before joggers got fed up with seeing discarded trash along their routes.
— Newell Nussbaumer, Buffalo Rising, 13 Feb. 2018

Yes! My people! While I’m not a jogger myself, I love pliking. That is, "plocka up" + biking. Be it with my cargo bike, jersey pockets or panniers, there are plenty of ways to do a little good on your bike rides. Since 2018 was the year of plogging, let's make it official: 2019 is the year of pliking!
— Xtracycle.com, 3 Mar. 2019

And if you don't exercise regularly, consider plogging, plalking, or pliking as a way to start. The twofold aspect of either activity might just be the motivation you need to get outdoors. You'll be making a difference in not only yourself but in your surroundings. The main exercise is aerobic, but there is an anaerobic component in leg bends, squats, lunges, and twists to pick up litter. Additionally, carrying and lifting a loaded bag can build arm muscles.

Pick as you choose. Every bit of litter picked up and properly disposed of makes a landscape that much more picturesque and healthy. Another incentive is that you will make people smile, or even wonder, when they take note of the absence of litter. And maybe your efforts will be officially recognized, and you will be honored with a garbage truck with your name on it. One can only dream, and that dream came true for American humorist and essayist David Sedaris who was recognized for his efforts on keeping Horsham District, England, litter-free during his walks.

Horsham District Council has paid thanks to a volunteer who devotes a great deal of time and energy to walking many miles clearing litter from near where he lives as well as surrounding areas. David Sedaris litter picks in areas including Parham, Coldwaltham, Storrington and beyond. In recognition for all his fantastic work and dedication and as a token of Horsham District Council's appreciation, the council has named one of their waste vehicles after him. The vehicle, bedecked with its bespoke Pig Pen Sedaris' sign was officially unveiled by the Lord-Lieutenant of West Sussex Mrs Susan Pyper at an outdoor ceremony on July 23. District councillor for Chantry Ward, Diana van der Klugt, said: "David Sedaris is a familiar and very welcome sight in the lanes and by-ways of this lovely part of Horsham District, as he tirelessly and painstakingly goes about gathering up the litter so thoughtlessly discarded. His is a wonderful example of community spirit in action. It is a great privilege and delight for Horsham District Council to be able to name one of its waste vehicles after David, as a sincere and appropriately cheerful token of their appreciation and thanks."
— The West Sussex County Times, 28 July 2014