You've probably seen images of an Egyptian pharaoh, Chinese emperor, or Roman empress reclining in comfort on a curtained bed or couch mounted on horizontal poles while being carried about on the shoulders of retainers. For those who might not be familiar with the vehicle's name, it's litter—and, yes, it is the same word that we use for trash on the ground or the stuff lining a cat's toilet. 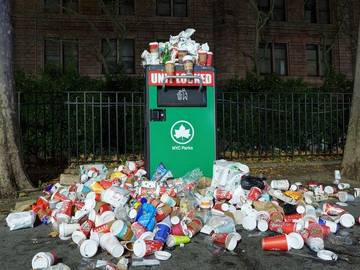 Come on. Just find another trash can.

The word litter is ultimately derived from Latin lectus, meaning "bed." From lectus also comes the French word lit of the same meaning, which provides the base for litiere, an Old French word that was the name for both a bed and the aforementioned vehicle. Middle English speakers adopted the French term in the 14th century in the forms litere and liter, and as in French, the word originally meant "bed" or "litter" (the vehicle).

The "bed" sense did not survive into Modern English; however, before its obsolescence, it gave rise to other senses of litter. The straw, hay, or like material laid down or strewn about to serve as bedding for animals was called litter. So were the offspring of an animal which were born at one time, alluding to the fact that they were born in one "bed." Once litter had been applied to animal bedding, it was not far-fetched to use the word for any odds and ends of rubbish lying scattered about or an untidy accumulation of such things.

lf she is cutting a piece of gauze or paper she is sure to make a litter all over the room….
— Isaiah Thomas, The Adventures of a Pincushion, 1788

His fingers were straying about among the litter of tin tubes and dry brushes, seeking for something.
— Oscar Wilde, The Picture of Dorian Gray, 1891

This 18th-century development yielded what is probably the most common sense of litter today, referring to trash thrown on the ground in public places.

During the mid-20th century, by association with the bedding used in barns and stables, litter came to refer to the absorbent material placed in a box or tray that is used by pets when the call of nature arises. Prior to commercial cat litter, such material included newspaper, sawdust, ashes, and anything else lying about the house that was absorbent.

Rounding out this history of litter is a sense developed from one of the word's first uses. As modes of transportation advanced, such as the spring-mounted coach, the appearance of litters on the roads declined, and so did the word's "vehicle" sense. However, it was given new life during the 19th century as the name for a bed, stretcher, or other device for carrying a sick or injured person.

Officials say Eric Scoville ... fell about 70 feet Saturday afternoon while climbing alone and un-roped at Frankenstein Cliff. Other climbers at the scene at the time assessed Scoville's injuries, called for emergency response and carried him in a litter about a half mile to a parking area where he was taken by ambulance to Memorial Hospital....
— The Associated Press State & Local Wire, 18 Mar. 2013