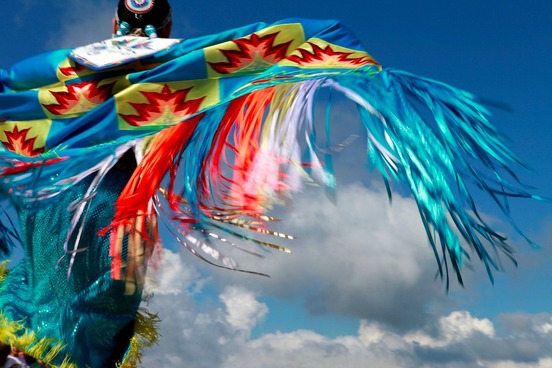 When the English language arrived on the North American continent, the land was already home to hundreds of rich and diverse languages that had been developing there for thousands of years. This list is a sampling of some of the English words borrowed from those languages. 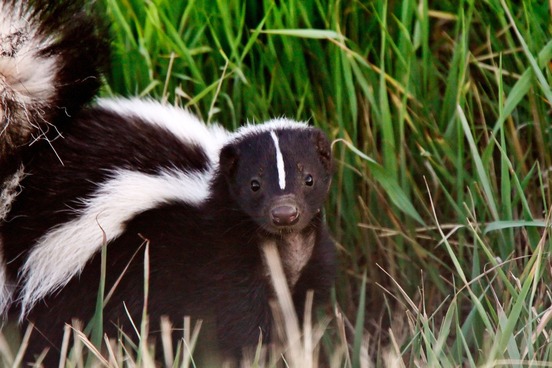 In earliest evidence, this word is spelled squuncke. The creature's English name is taken from the one the given it by the Massachusett tribe. Their word, in turn, derived from an Algonquian one whose parts translate as "urinate" and "fox" or "fox-like animal." (Algonquian is a family of Native American languages spoken by peoples from Labrador to Carolina and westward into the Great Plains.)

Other animals not formerly encountered by English speakers also received their English names from the names used by the native people of the continent: chipmunk is thought to come from an Ojibwa term meaning "red squirrel"; opossum traces back to an Algonquian word whose parts translate as "white" and "dog" or "small animal." Raccoon, moose, and caribou are all borrowings (from Virginian Algonquian, Algonquian, and Micmac, respectively). Woodchuck also comes from Algonquian, with its English-sounding components appearing through a process known as folk etymology. 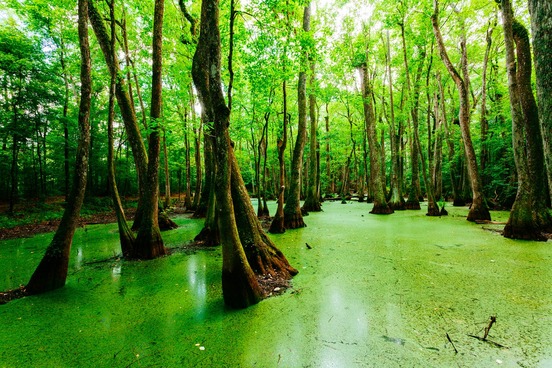 The word bayou evokes a uniquely southern scene of slow-moving water abounding in greenery. It's often associated with Louisiana in particular, and the word itself does indeed come to English by way of Louisiana French. But it's likely that the word's ultimate source is thought to be the Choctaw bayok, an origin more apparent in the intermediary Louisiana French form bayouque. 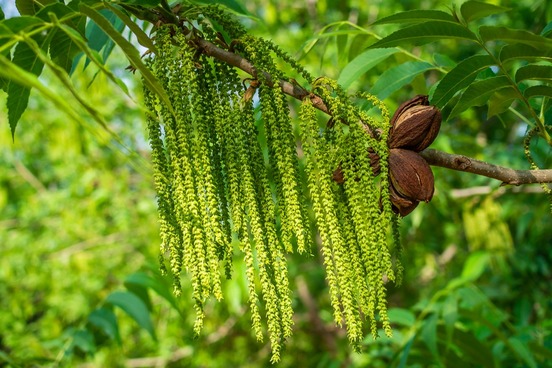 The hickory tree gets its name from a food the Algonquian speakers of Virginia called pawcohiccora. Pawcohiccora was made with pounded nuts and water. English speakers adapted the name of the food for the tree itself, and dubbed it pokahickory, which was later shortened to hickory.

Other trees get their names from North American indigenous languages as well. Catalpa and tupelo are both connected to Creek, with catalpa coming from katáłpa (itself from two parts: iká, meaning "head," and táłpa, meaning "wing"), and tupelo possibly from a Creek word whose who roots mean "tree" and "swamp." And some of these trees are better known for what they produce: pecan has its origin in the Illinois word pakani, and persimmon comes from Virginia Algonquian pessemmin. 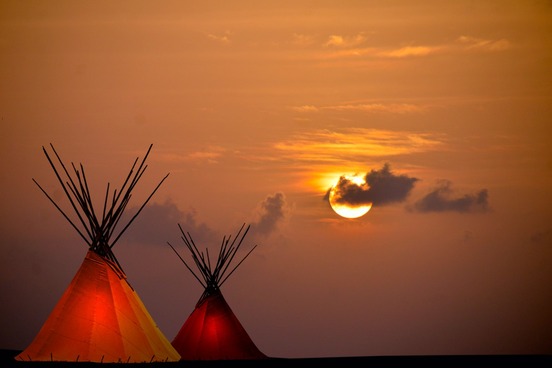 No one is surprised that the word tepee comes from a Native American language. The conical structures used especially by some tribes of the Great Plains and made from frames that were historically covered in animal skins have become emblematic in American pop culture of the Plains Native Americans. The word is borrowed from the Dakota thípi, the root of which means "to dwell." The spellings teepee and, less commonly, tipi are also in use. 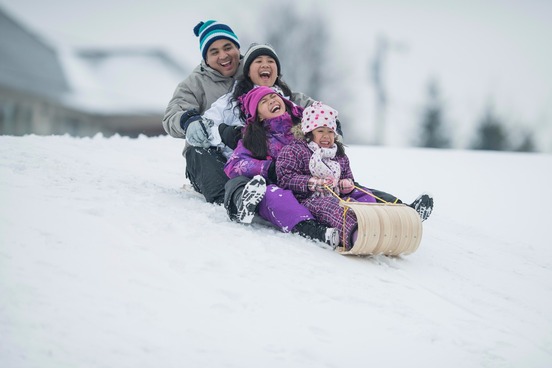 Toboggan came to English by way of Canadian French, but its origin is ultimately Algonquian. The word shares an ancestor with the Micmac tobâgun, meaning "drag made of skin." Though toboggan typically refers to a long flat-bottomed sled, its meaning sometimes extends to what toboggans work best on ("a downward course or a sharp decline"). It's unclear how the word came also to refer to the long knitted cone-shaped cap better known as a stocking cap. That use is mainly limited to the southern and midland US. 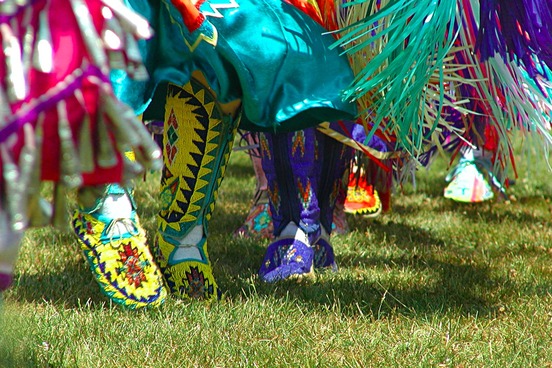 Powwow is another term with an unsurprising origin. The word is from either of two Native American languages: Narragansett (the word powwaw) or Massachusett (pauwau). Both languages are members of the Algonquian family, the former having been spoken in what is now Rhode Island and the latter having been spoken in what is now Massachusetts. Although these days the word powwow refers to a multi-day cultural celebration, our earliest uses of the English word powwow refer to a Native American healer. 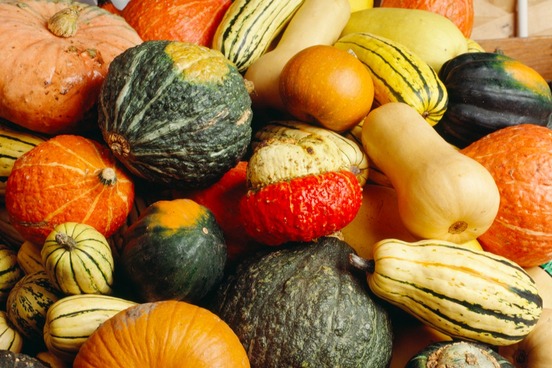 When groups of English speakers began to settle on the North American continent, the word squash was already part of their vocabulary. It was a verb used as a synonym of crush, as it still is today, and it was also a noun referring to an unripe pod of peas; Shakespeare used that now-obsolete meaning in several plays (In Twelfth Night Malvolio describes Viola-in-disguise as "Not yet old enough for a man, nor young enough for a boy; / as a squash is before 'tis a peascod.") The zucchini, pumpkins, and their botanical relations that we now know as squash were in the Narragansett language called askútasquash. That word was borrowed into English as isquoutersquash, which was later shortened and altered to match an earlier word the English speakers were familiar with: squash. 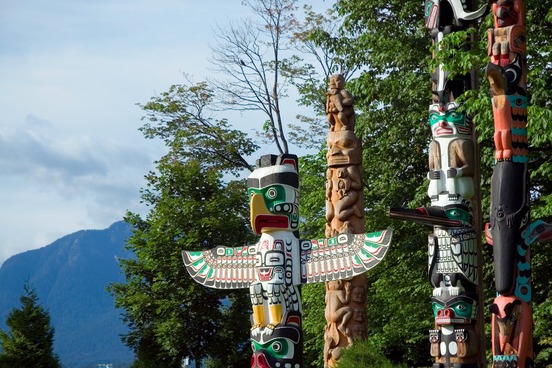 Totem in its original English sense refers to an emblematic depiction of something (such as an animal, plant, or supernatural being) that symbolizes a family or tribe. Nowadays, it more broadly refers to something or someone that is a revered symbol or emblem of something. The word is Ojibwa in origin, borrowed from oto·te·man, meaning "his totem." 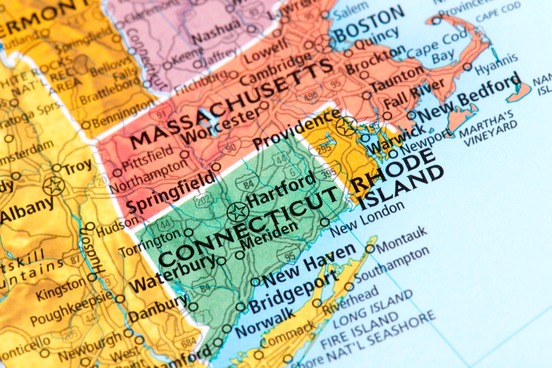 While the English language has adopted a tiny fraction of general vocabulary terms from the extraordinarily diverse and numerous indigenous languages of North America, evidence of these languages is starkly present on any map of the area. From the names of states, cities, and towns to the names of rivers, lakes, mountains, and deserts, the contributions of Native American languages are omnipresent, and too many to catalog here.

More place names come from other indigenous words. Connecticut, which names both a state and a river, comes from an Algonquian word meaning "land on the long tidal river," and the state of Wyoming gets its name from a Delaware word meaning "land of vast plains."