We bring you the strangest, most elusive beasts in the dictionary.
Last Updated: 13 Apr 2022 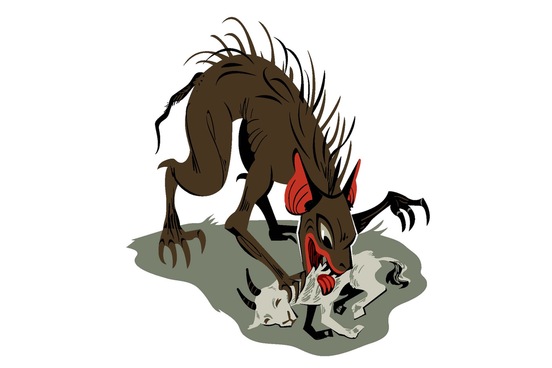 "Some swear the creature is actually a vampire — resembling a large rat, but with horns and fangs ... In any case, the Chupacabra ... reportedly drains the blood of cows, sheep, and goats throughout the republic, leaving an unusually shaped wound." — Diana Reiss-Koncar, Vibe, April 1997 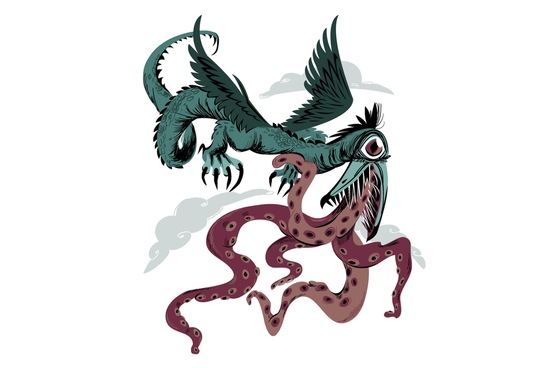 "'People who say there is no such animal are the ones who need to get right — we are not,' he stated emphatically today. 'I saw the snallygaster,' he repeated, 'and I saw him change from white to black.'" — The News (Frederick, MD), November 28, 1932

a mythical nocturnal creature that is reported chiefly from rural Maryland, is reputed to be part reptile and part bird, and is said to prey on poultry and children 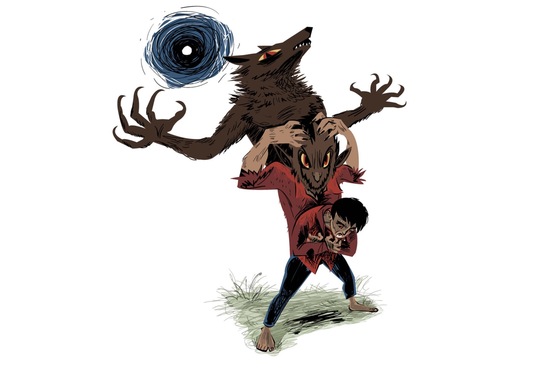 "The werewolf was by day a man, but by night a wolf given to ravage and to slaughter, and having a charmed life against which no human agency availed aught." — Eugene Field, The Werewolf, 1911

a person transformed temporarily or permanently into a wolf or capable of assuming a wolf's form : lycanthrope

Are there werewolves where there aren’t wolves?

Lycanthropy, the delusion that you have turned into a wolf or another beast, has some ancient roots, and belief in werewolves can be found around the world. Other dangerous animals — such as bears, tigers, or hyenas — have historically filled the wolf's role in lycanthropy in countries where wolves are not common. 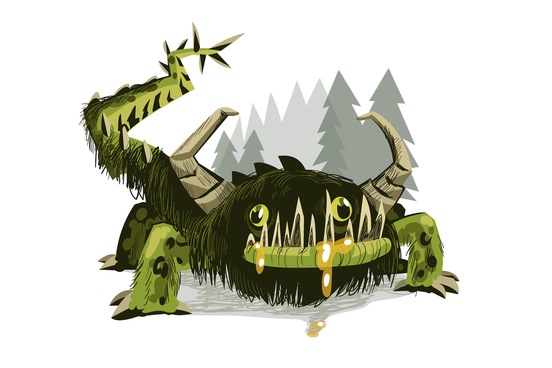 "The rest of the party had commenced piling up birch bark around the brute and thrown a few sticks of dynamite and by this time the fight got pretty hot, as the Hodag had became [sic] so infurated [sic] that he began slashing down the timber which was falling in every direction, and made it dangerous for the now furious hunters, and the black tar coal smoke which the hodag's breath had turned into, mixed with the sickening odor of the mangled dogs, was beginning to suffocate the now very much excited party." — The New North (Rhinelander, WI), October 28, 1893

a mythical animal reported chiefly from Wisconsin and Minnesota, noted for its ugliness, lateral horns, and hooked tail, and reputed to be outstanding in both ferocity and melancholy 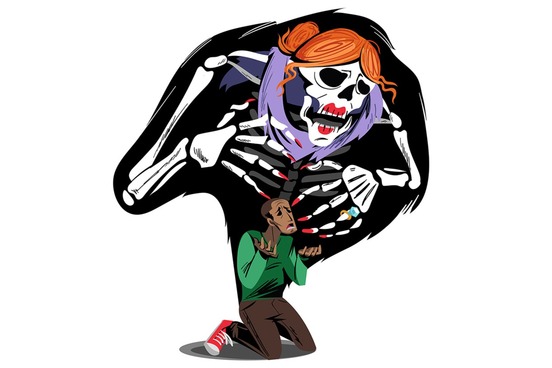 "A dybbuk is the wandering soul of a dead person. You don't want to make the mistake of inviting one into your home. You don't have to be Jewish to figure that out." — Roger Ebert, review of the film A Serious Man, October 7, 2009 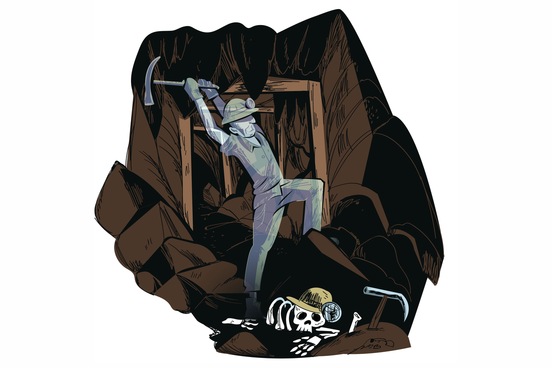 the ghost of a man killed in a mine

Probably from Tommy (nickname for Thomas) + knocker; from his being supposed to be responsible for the creaking of timbers in the mine 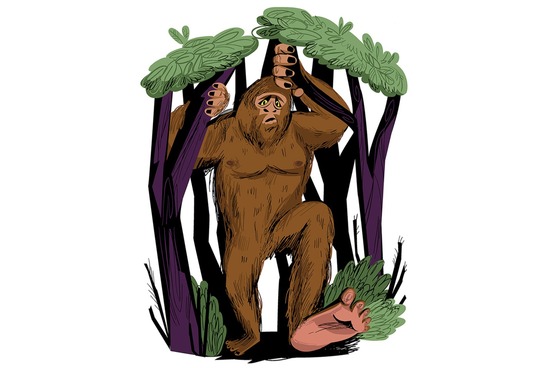 "In the Northwest, the hirsute hominid, who dates to American Indian lore as Sasquatch, is a minor industry." — Timothy Egan, New York Times, January 3, 2003

: a hairy creature like a human being that is reported to exist in the northwestern U.S. and western Canada and is said to be a primate between 6 and 15 feet (1.8 and 4.6 meters) tall — called also bigfoot 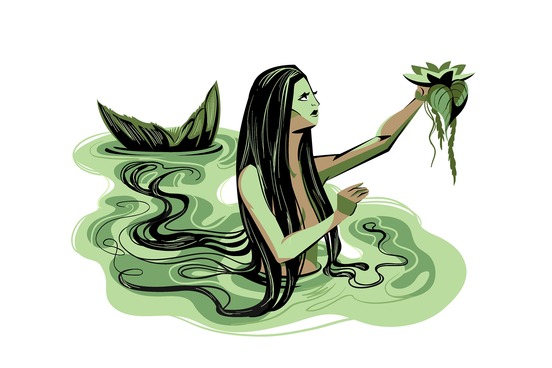 a supernatural creature originally in Germanic folklore and conceived of in many forms but usually as having the form of a woman or as half human and half fish, dwelling in fresh water usually in a beautiful palace, and usually unfriendly to man

The Nix by Richard Garnett

The moon with silvery ciphers traced
The leaves, and on the waters played;
She rose, her arms my form embraced,
She said: 'Come down with me, fair maid.'

She led me to her crystal grot,
She set me in her coral chair,
She waved her wand, and I had not
Or azure eyes or golden hair.

Her locks of jet, her eyes of flame
Were mine, and hers my semblance fair:
'O make me, Nix, again the same,
O give me back my golden hair!'

She smiles in scorn, she disappears,
And here I sit and see no sun;
My eyes of fire are quenched in tears,
And all my darksome locks undone. 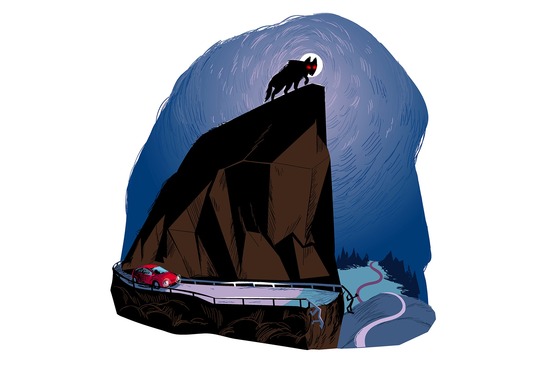 "The Horton 'Guytrash' was another boggard in our young days, and generally took the form of a 'great black dog' with horrid eyes." — Edward Peacock, The Folk-lore Journal, January-December, 1886

a specter or ghost especially in the form of an animal 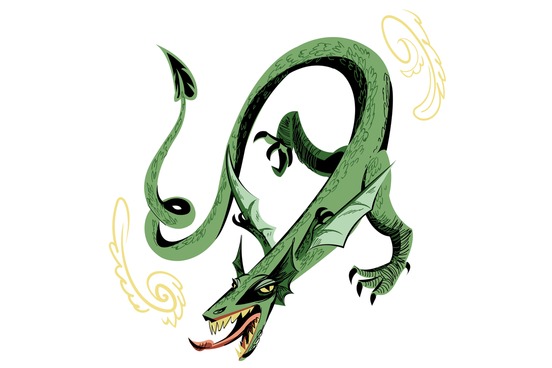 "The wyvern is essentially an English beast, and in olden times was much accredited and respected." Herbert Crest, writing in Collections Historical & Archaeological Relating to Montgomeryshire and its Borders, Vol. 24, 1890 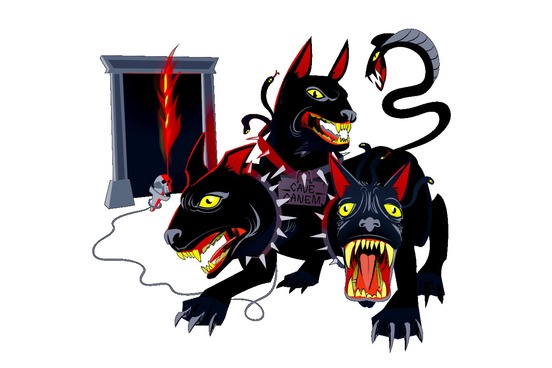 This gave rise to the English phrase "a sop to Cerberus" meaning "a concession or bribe to conciliate a person otherwise liable to be troublesome." The reference is to a passage in Vergil's Aeneid, when Aeneas slips by Cerberus, after giving him a sop as distraction. 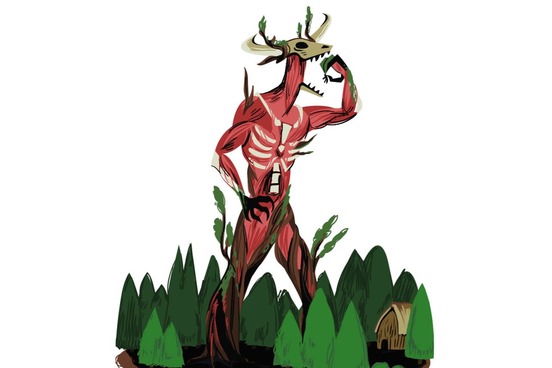 "Although it is ten years since the Wendigo has been observed—when he trudged through the eight-feet deep rapids of the Echoing river, which only reached to his knees — there have been evidences that he still seeks human flesh after his winter's hibernation." — The Winnipeg Tribune, January 31, 1947 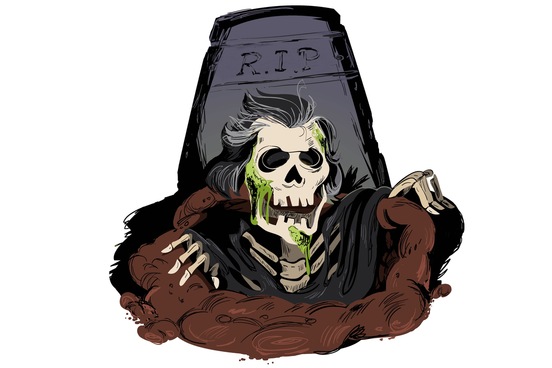 "A zombie is supposed to be the living dead: people who die and are resurrected, but without their souls. And they can take orders, and they're supposed to never be tired, and to do what the master says . . . ." — Zora Neale Hurston, interview, January 25, 1943

Zombie is derived from the Louisiana Creole or Haitian Creole word zonbi. Although the word first appeared in English in the 1870s, it wasn't the subject of much interest among English speakers until the 1940s when zombie movies like I Walked with a Zombie (1943) and Zombies on Broadway (1945) saw the start of a trend we're still living with. 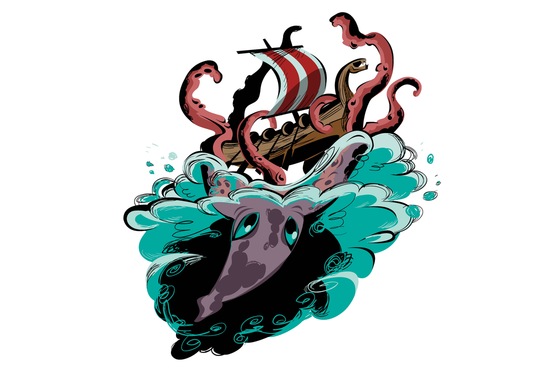 "Below the thunders of the upper deep,
Far, far beneath in the abysmal sea,
His ancient, dreamless, uninvaded sleep
The Kraken sleepeth…"
— Alfred Tennyson, "The Kraken", from Poems, Chiefly Lyrical, 1830 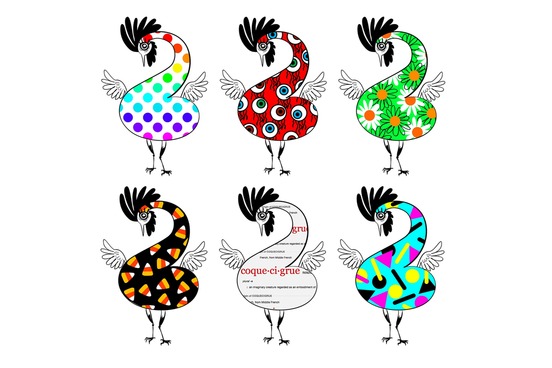 "Coquecigrue is one of the 'fearful wildfowl' of Rabelais' invention. These hippogriffs and other monsters are painted on the Chinese lanterns hung up in the pastry-cooks' shops." — The Journal of Education, October 1, 1893

an imaginary creature regarded as an embodiment of absolute absurdity

As the embodiment of absolute absurdity, no other creature could provide the final word of this list of monsters. Unfortunately, our website cannot support the coquecigrue in all its glory, so click here to view the full effect.

The word is of French origin—François Rabelais in Gargantua uses the phrase à la venue des cocquecigrues to mean "never." Charles Kingsley later translated that phrase in The Water Babies, when the fairy Bedonebyasyoudid reports that there are seven things he is forbidden to tell until "the coming of the Cocqcigrues."

Although we've reached the end of this list, the dictionary is dark and full of terrors, and you'll only find an end to the frightful creatures contained therein upon the coming of the Coquecigrue.