'Misdemeanor': Not Always a Crime

The demeanor part used to be much bigger.

Among words that name crimes, misdemeanor gets off easy. Today it officially designates a minor legal offense, but in the past it had meanings that could refer either to very major acts or things not even punishable by law. 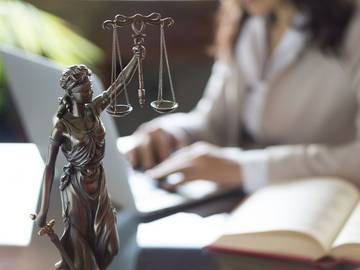 “Crimes and misdemeanors” is a redundant fixed phrase.

Misdemeanor comes from demeanor, which means “behavior toward others” or “outward manner” (as in “his quiet demeanor”). Demeanor derives from the verb demean, which means “to conduct or behave (oneself) usually in a proper manner”—not to be confused with the other and much more common verb demean that means “to lower in character, status, or reputation” (as in “I won’t demean myself by working for so little money” or “Don’t demean the hard work they’ve done”). These two verbs are spelled the same way but come from different roots: the former comes from the French verb mener (“to lead,” “to drive”) and ultimately from the Latin minare (“to drive”). Demean meaning “to degrade” or “to debase” comes from the adjective mean, which originally meant “humble” or “inferior in rank,” hence, this demean means “to make humble” or “to make lower.”

So, because it developed from the verb that means “to conduct or behave (oneself)," misdemeanor literally means “bad behavior toward others.” This led to parallel usage as both general bad behavior and legal bad behavior: both definitions appear in Nathan Bailey’s Etymological Dictionary of 1721:

MISDEMEANOR a behaving of one’s self ill; an Offence or Fault

High MISDEMEANOR, a Crime of a heinous nature, next to high Treason

Samuel Johnson’s dictionary from 1755 showed that misdemeanor by itself (as opposed to high misdemeanor) referred to a less serious offense:

MISDEMEANOR. Offence; ill behavior; something less than an atrocious crime

Johnson himself later used the word when describing events in 1775 that would lead to the American Revolution:

By 1828, a further explanation is given in Noah Webster’s An American Dictionary of the English Language:

For a time, misdemeanor also referred to a person guilty of or imprisoned for a misdemeanor (the Oxford English Dictionary records the use “keep the felons and misdemeanors separate”), but this way of using the word has become obsolete.

Webster was a self-taught lawyer, and was very politically active during the time that the U.S. Constitution was drawn up, so he would have been aware that the synonymous or redundant pair “crimes and misdemeanors” appeared in Section 4 of Article Two of the Constitution, in a specific legal idiom:

The President, Vice President and all civil Officers of the United States, shall be removed from Office on Impeachment for, and Conviction of, Treason, Bribery, or other high Crimes and Misdemeanors.

“Crimes and misdemeanors” was used in English law since the 14th century, and was among the fixed phrases using synonymous terms or terms of art found in parliamentary and legal language at the time of the American Revolution (others include “rules and regulations” and “emoluments and salaries”). It can be very difficult to distinguish between any of these pairs of words, and their frequent use together renders them less technical in today’s highly specific legal vocabulary. “High crimes” (and “high misdemeanors”) refer to serious or grave crimes committed by those with some office or rank, and was used in the language describing impeachment proceedings of members of the British Parliament in the 18th century.

In British law today, misdemeanor no longer has a specific meaning, but in American law, it is “a crime less serious than a felony.” As misdemeanor became more specific, crime became the more general term for any legal offense. Using misdemeanor today to mean simply a “misdeed” is far less common than it was in the past, but if you do, it’s unlikely that you’ll get a traffic ticket from the language police.