Giving Meaning to the Latin (and French) in 'The Exorcist'

We can explain what the Demon says, not how the Father exorcised it. 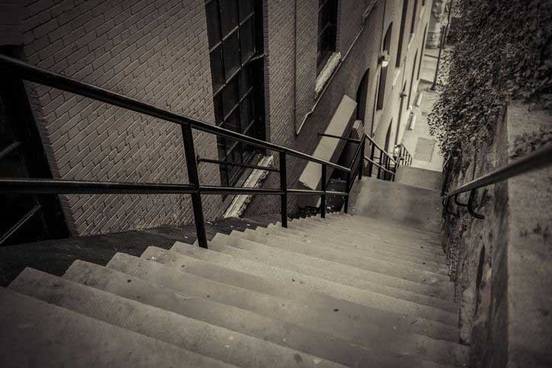 American author William Peter Blatty wrote the horror novel The Exorcist, published in 1971, and he also produced and wrote the script for the classic 1973 film version—the screenplay for which he won an Academy Award. The book is an account of the demonic possession of a girl, Regan MacNeil, by a "Captain Howdy"—an alias of Pazuzu, an ancient demon—and of the desperate attempts to free her through exorcism, which is conducted by two priests.

Before we begin to translate the unforgettable scene during which coming-of-age Regan—who has already urinated on the floor at a party, performed a spider-walk, levitated a bed, and spewed pea-green vomit—profoundly speaks Latin (and French) through the Demon to Father Damien Karras, a word on exorcism. It refers to a ritual act that is addressed to evil spirits to force them to abandon an object, place, or person; in particular, an exorcism is performed in Christian religions to expel a demon or spirit from a person who has come under his or her power. The word is conjured from Anglo-French exorciscer and is ultimately, via Latin, from Greek exorkizein, from the combination of the prefix ex- ("out of," "away") and horkizein, meaning "to bind by oath" or "to adjure" (adjure also implies commanding under penalty of a curse). Greek horkos means "oath." In sum, when a priest exorcises a demon from a person, he adjures it to leave.

We will now begin our translation of the dialogue between Demon/Regan and Father Karras. Mind you, Demon/Regan just telekinetically threw open a bedside table drawer and the Father, who is trying to figure things out, asks her/it to do it again. 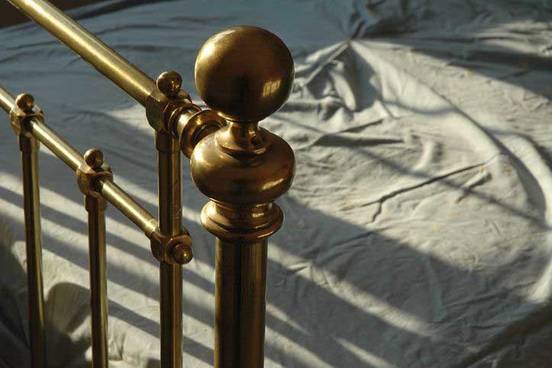 Mirabile dictu is a Latin phrase meaning "wonderful to relate." (A similar phrase is mirabile visu, "wonderful to behold.") Latin mīrābile is related to English's marvel, which refers to people or things that cause wonder or astonishment or to the feeling of great wonder or astonishment ("The building is an engineering marvel"; "The children marveled at the magician's tricks"). It appears in Middle English as merveile and mervayle, both borrowings from Anglo-French merveille. The French derivative traces to Latin mīrābilia, a noun form meaning "wonders, marvels" based on the verb mīrābilis, "causing wonder, remarkable."

The second part of the phrase, dictu, traces to Latin dīcere, meaning "to talk, speak, say, utter," as found in diction (verbal expression) and dictionary (a treasury of words for speaking). 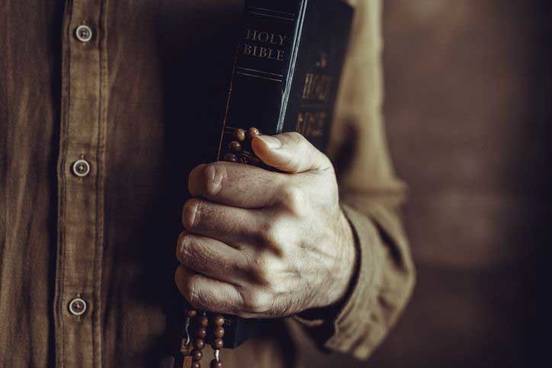 Ego is the Latin word for "I." In psychoanalytic theory, it refers to that portion of the psyche which serves as the mediator between the self (that is, the "I" who feels, acts, thinks) and reality through perception and adaptation. The ego coexists with the id (said to be the agency of primitive drives) and superego (considered to be the ethical component of personality). Generally, ego is used simply to mean one's sense of self-importance or self-esteem, whether exaggerated ("big ego") or not ("a healthy ego").

Absolution, in Christianity, refers to the pronouncement of the forgiveness of sins by a priest that is made to a person who has repented. In the early Christian church, the priest publicly absolved repentant sinners after they had confessed. During the Middle Ages, however, it became the custom to hear confession and grant absolution privately. In English, the priest absolves the sinner using variations of the statement "I absolve thee from thy sins in the name of the Father and of the Son and the Holy Spirit." In Latin, the priest would say "ego te absolvo" ("I absolve you") for absolution.

The act of absolving can be seen as releasing someone from blame or sin, or "loosening" the hold that responsibility has on a person, which provides a hint about the word's origins. Absolve was adopted into Middle English in the 15th century from the Latin verb absolvere, formed by combining the prefix ab- ("from, away, off") with solvere, meaning "to loosen" or "to release." 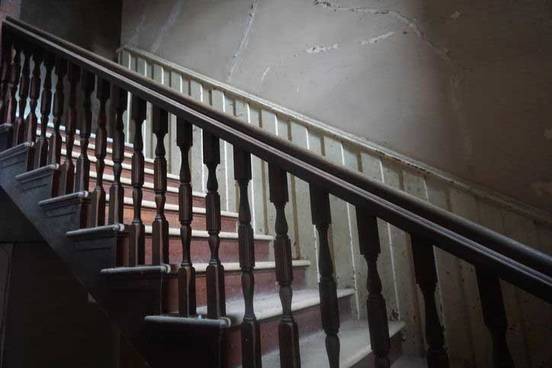 In the past, the abbreviation QED was placed at the end of a logical or mathematical proof to indicate its completion. QED stands for quod erat demonstrandum, meaning "which (is what) was to be shown." Another popular quod-based abbreviation is qv for quod vide, meaning "which see" and used to identify a cross-reference in text. Quod in these phrases, and Father Karras's question, in Latin means "what."

Latin nomen can mean both "name" and "good reputation," so we have such words in English as nominate, nominal, and nomenclature, as well as ignominious and misnomer.

Latin mihi has a connection with English advice. In Middle English, modern advice was variously spelled avis, avise, advis, or advise, all of which mean "thought, judgment, or opinion" and are borrowed from Anglo-French. The Anglo-French word was devised from the phrase a vis, as used in ce m'est a vis ("that appears to me"); a vis itself means "apparent" and is related to Latin vīsus, the noun form of the verb vidēre, "to see." In Old French, a phrase similar to ce m'est a vis is ço m'est vis, "that seems to me," and a Latin counterpart is mihi est vīsum.

All told, Father Karras is saying in Latin, "What is my name?" 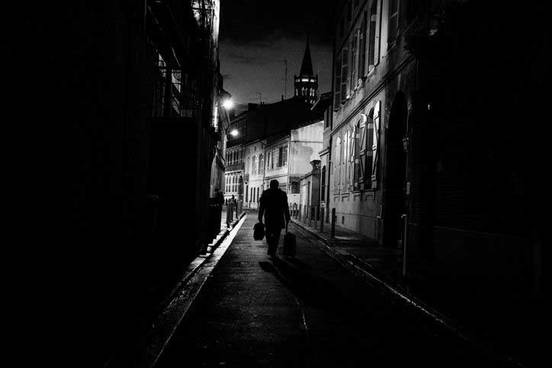 Bonjour is a French expression for "Hello," "Good morning/day/afternoon." It began appearing in English writing in the 16th century. Bonsoir means "Good evening" in French.

The next line in the exchange is Quod nomen mihi est? We'll forgive the Father for repetition—he had a lot going on right then—and move on. 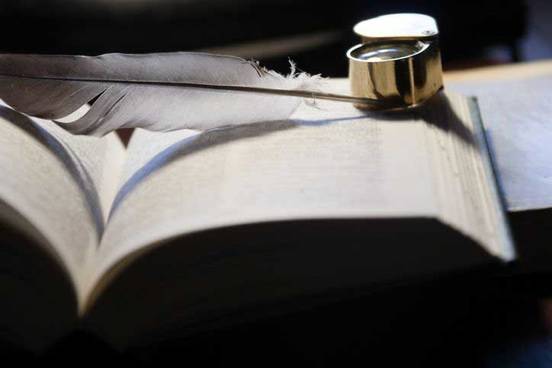 Again, wordplay by Pazuzu, who, by the way, is an Assyrian and Babylonian mythological demon. In French and German, tante is the name for a person's aunt, or an older woman who shares a close relationship with a younger person that is similar to an aunt's relationship with a niece or nephew.

Plume means "feather of a bird," and a "quill pen," and the quill, which is the hollow shaft of a feather, has been used as a writing instrument for centuries.

Traditionally, the phrase la plume de ma tante ("The pen [quill] of my aunt") has been used to teach elementary French—hence, demonic wordplay. (Calling Pazuzu out on his knowledge of French; he's fluent.) 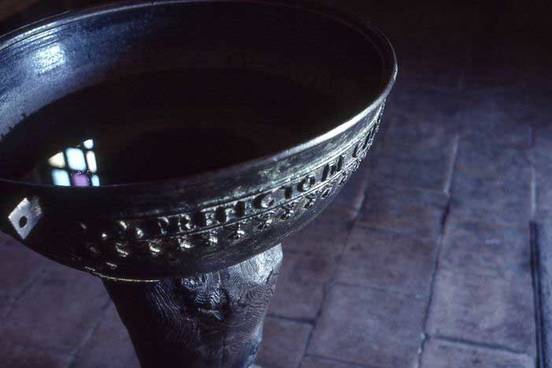 KARRAS: How long are you planning to stay in Regan?
DEMON: Until she rots and lies stinking in the earth.
[Father Karras pulls a vial from his pocket]
DEMON: What's that?
KARRAS: Holy water.

Holy water is water that has been blessed and, for centuries, has been used to convey a blessing to churches, homes, persons, and objects. It is also used to ward off unclean spirits and as a safeguard against sickness and disease. In churches, holy water is used as a reminder of baptism by the faithful.

The last line by the Demon/Regan in this scene can be considered gibberish, or it might be regarded as a semordnilap, since read backwards it is "I am no one." The word semordnilap is a reversal of palindromes and was coined by wordies for words or phrases that can be written in reverse order to make a comprehensible word or phrase with different meaning—pairs like devil/lived, desserts/stressed, and even Danny's chant of redrum for murder in Stephen King's The Shining. Palindromes are words or phrases having the same meaning when read from left to right and right to left: civic, level, redder, redivider, for example.

Bless you for reading to the end.