Is Junk an Adjective or a Noun?

When a "noun" and an "adjective" love each other very much...

Most people who have at least a passing interest in language (which would likely include anyone reading this article on a dictionary site) are fairly certain about their basic parts of speech. We may occasionally get tripped up about whether well is an adverb or an adjective, but when such confusion arises we comfort ourselves with the fact that at least we can tell our adjectives from our nouns. Or can we? 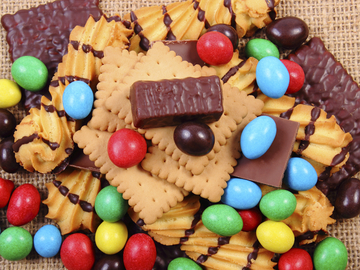 The meaning of "junk" expanded over centuries of use to refer to anything of little worth.

Most of the time we can. When encountering a sentence such as “I am a terrible student of grammar” it is clear that terrible is an adjective, modifying the word student, which is a noun. But what if we use a slightly more confusing phrase, such as “This article has some junk grammar in it.” Again, it’s clear that grammar is a noun, but what are we to make of the word junk? Is it a noun, an adjective, or some other, little-discussed, part of speech? Let’s look first at where junk comes from.

There are two separate junks in our language. The one which doesn’t concern us very much is the word for a kind of Chinese boat. This word comes from Portuguese and has been used in English since the beginning of the 17th century. The more common junk (which comes from Middle English), has been around somewhat longer (since the 14th century), and, as is the case with so many words of a certain age, has changed its meaning over the years. The first known meaning of this junk was “a piece of worn or poor rope or cable.”

As the centuries went on, junk started to take on additional meanings, each one serving to make the word less and less specific. By the middle of the 19th century junk was being used to refer to any sort of undesirable and worn-out article, or some rubbishy quantity of stuff. Junk also began to be used in the 19th century to modify other nouns, such as in the case of junkyard (which began its life as two words, and then they grew friendly enough that they decided to move in together, perhaps to save on rent and electric bills).

Junk has proved itself to be very practical as an addition to another noun, often used to indicate that the noun being modified is of low quality, or otherwise problematic. One of the more common such uses is junk food, which appears to have begun being used in English in the 1920s.

Years ago when we heard the word “Junk,” we invariably thought of something that is unfit for further use other than salvage. But today we often hear the word “junk” applied to off brands and inferior quality of foods offered for sale at alluringly low prices … There’s no “junk” foods of any kind found in an O. P. Skaggs System Store.
(Advt.) The Lincoln State Journal (Lincoln, NE), 15 Jun., 1928

By 1960 junk-food had begun to be commonly used in specific reference to the kind of foods that are beloved by children with sweet-teeth the world over.

For some children in this age group the “junk” foods—candy and soft drinks—may provide calories in excess of their needs of may take the place of fruits, vegetables and milk which are significant contributors of nutrients other than calories.
Linnea Anderson, Nutrition and Family Health Service, 1960

In the 1970s junk bond started seeing use, as a way of describing a type of high-risk (and high-yield) bond. And beginning in the middle of the 1980s we see junk frequently attaching itself to science, in order to describe a type of biased science, one that does not hold up under thorough scrutiny.

Now that the potted history is out of the way, we can turn to the more pressing question: what part of speech is this junk? Well, it’s complicated. Some people classify it as a noun, an adjective, and a verb (“to get rid of as worthless”). We categorize it only as a verb and a noun. However, there is a class of nouns, known as attributive nouns (read more about them here), which function as adjectives, and modify a noun which follows them. Our language is rich in these constructions (“dictionary entry,” “hack writer,” etc.), and we use them all the time, without pausing to worry if we’ve put a part of speech in the wrong spot.

You needn’t worry yourself over the technical term for what exactly junk is doing in these cases, unless you’ve already embarked on a career in linguistics, or lexicography. In which case, you’ve likely got bigger problems to worry yourself with.