Homophones (“one of two or more words pronounced alike but different in meaning or derivation or spelling”) tend to rank high in the list of words which have the power to trip people up, all the more so when one of them is relatively obscure. A fine example of this is the pair ringer and wringer. Do you put someone through the wringer or through the ringer? Is it hand-wringing or hand-ringing? And is the past tense of wring wringed, wrang, or wrung? 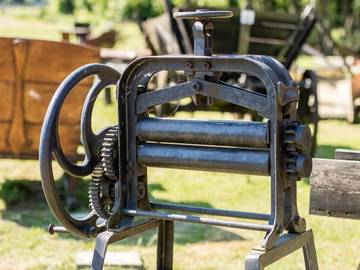 Make sure the machine isn't what's wringing your hands.

Wringer has a fairly literal meaning (“one that wrings, such as a machine or device for pressing out liquid or moisture”), which is much less in use nowadays than it once was; before the ubiquity of electric clothes dryers, wringers were considerably more common. The word also has a figurative meaning (“something that causes pain, hardship, or exertion”), which has eclipsed the laundering sense. The idiom through the wringer refers to having been through a series of very difficult or unpleasant experiences. This idiom came about in the early 20th century, and in initial use the experience it referred to was often that of questioning.

One of my first telephone interviews was with Mayor Queen, who chuckled when I asked the question. “I’d put him through a wringer to get all the information I could get out of him,” he said.
— The Winnipeg Tribune (Winnipeg, Can.), 15 May 1941

Florig will continue on duty in charge of the Strip district pending the police board hearing Friday when Dorsey proposed to put him through the wringer for “making false reports” about him.
— Pittsburgh Post-Gazette, 10 Mar. 1936

”He’s been trained so fine in the silence business that he hardly dares open his mouth when he eats. Go up there and put him through the wringer.” “Do what?” says the Bishop. “Give him the headquarters quiz,” says I.
— New York Tribune, 4 Aug. 1907

When describing the act of squeezing (either clothing or a person), the correct word is wringer; likewise with the act of hand-wringing (“an overwrought expression of concern or guilt”). The mistaken application of ringer or ringing where it would be more appropriate to use wringer or wringing is commonly found in edited prose (although not commonly enough that such use is accepted as a variant).

But, hey, once in a while it’s refreshing to see what is apparently a grass-roots movement work so spontaneously and successfully, without endless hand-ringing and deliberation.
— Milwaukee Journal Sentinel, 17 Apr. 2000

"The killer instinct — I basically sharpen that," McGuire said. "We teach them to be comfortable being uncomfortable.” McGuire put VCU through the ringer for three days last year. This year, he said, VCU's coaches asked him to "up the ante.”
— Ben Cohen, The Wall Street Journal, 23 Nov. 2012

Ringer also has a definite literal meaning (“one that sounds especially by ringing”) that has been largely supplanted by figurative ones; the word can also mean “one that enters a competition under false representations” or “one that strongly resembles another.” The latter of these is often found paired with the word dead. While it is theoretically possible to have a dead wringer, provided one wished to use a broadened sense of dead in relation to a malfunctioning clothing wringer, you would do well to avoid using this turn of phrase.

The melding of news and entertainment became complete with Saturday Night Live cast member Tina Fey’s dead-wringer impression of Republican vice-presidential candidate Sarah Palin, and Palin returned the favour by appearing on the show.
— The Vancouver Sun (Vancouver, BC, Can.), 29 Dec. 2009

As for the proper declension of wring, the past tense of the verb is always going to be wrung. This is simpler than the habits of the verb ring, which changes its past tense depending on which meaning is intended. When ring is used to mean “encircle,” “shape like a ring,” or “to provide with a ring” ringed is called for. If, however, ring is used in reference to making a sound (or placing a telephone call) the past tense is rang and the past participle is rung.

“After Adam had rung me at three and five o’clock in the morning I could have cheerfully wrung his neck; I rang work the next day and said I felt like I’d been through the wringer and wouldn’t be coming in.”