The difference between 'grammar' and 'usage'

Do you hate bad grammar? You very likely do, or at least think that you do, and few people are so bold as to claim that they love such a thing. Finding complaints about the real or imagined misuse of language is an easy thing to do. But when we begin to look at complaints about (or simply comments regarding) the subject of bad grammar a peculiar thing happens: it’s not so clear whether the thing being complained about is actually grammar, or if it is perhaps usage. What’s the difference? 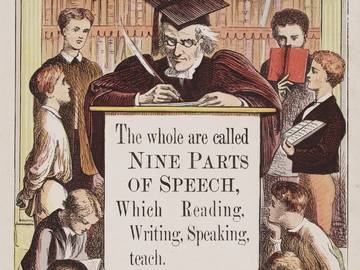 Photo: Illustration from Walter Crane's "Grammar in Rhyme," circa 1868

'Grammar' refers to the syntax, inflections, and structure of a language, whereas complaints about the misuse of the word 'irony' would fall into the category of 'usage'.

This dictionary provides four possible senses of grammar, as the word specifically relates to the use of language:

1a: the study of the classes of words, their inflections, and their functions and relations in the sentence

1b: a study of what is to be preferred and what avoided in inflection and syntax

2a: the characteristic system of inflections and syntax of a language

2b: a system of rules that defines the grammatical structure of a language

You may have noted that these senses are restricted to issues such as the syntax, inflections, and structure of a language, and do not touch upon whether such-and-such a word really means what one thinks its does. Thus, this definition of grammar would not cover matters such as whether it is correct to say fewer or less, or whether the word gift may be used as a verb. Some people would consider the question of whether a writer is potentially misusing a word to be more of an issue of usage—a sense of which we define as “the way in which words and phrases are actually used (as in a particular form or sense) in a language community”—than one of grammar.

It is interesting to note that some people who wax vociferous on this subject appear to not distinguish between these two words. A blog post from 2015 titled “20 Misused English Words That Make Smart People Look Silly” goes over a list of commonly confused or questionable word choices (such as bring/take, ironic/coincidental, and imply/infer), and begins its final paragraph by stating “English grammar can be tricky….” There is nothing wrong with your grammar if you use ironic in place of coincidental (“isn’t it ironic, my meeting you here with her”). However, if you started shifting words out of their usual order (“isn’t ironic it…”), inflecting verbs in a decidedly non-standard way (“my meets you here”), or putting pronouns in the wrong case (“meeting you here with she”), then you certainly have issues with grammar, rather than usage.

This may be a rule (for some people, at least), but is it actually grammar? It’s difficult to say; the guidelines listed above of when one should use that and which weren’t common until the Fowler brothers, authors of the 1906 book The King’s English, decided people should pay attention to them. Undoubtedly there are some people out there who would say “Yes! Whatever Henry Watson Fowler says about language qualifies as grammar to me!” Other people, however, may take the view that grammar is best applied to the way that a language functions, rather than to rules laid out by a small handful of people, even if they are named Fowler.

There is a graphic that has been widely shared on Facebook and other social media sites over the past few years, labelled “Top Ten Grammar Peeves.” Much of the information on the list is simply incorrect, such as the assertion that “An apostrophe is never used to form a plural” (they frequently serve this role), and “Affect is a verb. Effect is a noun” (each of these words is both a noun and a verb), but the aspect of this list that is more pertinent to our current topic is the extent to which grammar and usage seem to be viewed as synonymous. The list asserts that “nonplus does not mean what you think it means,” “Irregardless is not a word,” and another variant on the proper way one should use literally. To make the case that each of these perceived errors represents a lapse in grammar requires that we provide that word with a significantly broader meaning than it has traditionally had.

None of this should be taken to mean that we are judging you if you use grammar to apply to what some people might insist is actually usage. It may very well be that grammar is indeed shifting its meaning to include referring to whether or not enormity may be used for “a large thing,” rather than only meaning “great wickedness.” If this is the case, and if there is sufficient evidence of this shifted meaning over time, dictionaries will most likely revise definitions of grammar to reflect this shift.

So if you are using the word grammar in reference to non-grammatical functions (such as usage), then you are, in the eyes of some, part of the problem: you are actively working to change the meaning of a very important word in English. Before you hang your head in shame, however, you should be aware that well-nigh every speaker of the English language is, in some small way, working actively to change the language; the fact that our language is changing is simply a sign that it is alive, rather than dead.