The doctor is in, but whose appointment is it?

Both doctor's appointment and doctor appointment are acceptable for describing a medical visit. In the first case the 's, instead of showing possession, is actually showing association; appointments of this nature are associated with doctors. In the latter case, the noun doctor is being used adjectivally to describe the type of appointment. 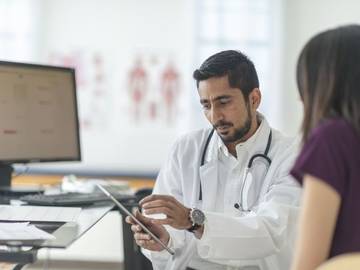 Let's say you're due for your annual checkup. Do you say you have a "doctor's appointment" or a "doctor appointment"?

If you're like the majority of English speakers you'll say "doctor's appointment," even though nothing is wrong with the less common "doctor appointment."

Why do most of us say "doctor's appointment"? The simple answer is that it's convention. Just why either is fine is more complicated—so read on, language enthusiast.

Whose Appointment Is It?

But that isn't all that 's does. Though we recognize that it is deeply controversial to say so, 's is sometimes a marker of the plural, as in "mind your p's and q's" and "a pattern of x's." It also functions as the contracted form of us in let's and the contracted form of is in the likes of it's, she's, and he's.

But there's also the 's that looks at first glance like a regular possessive marker but that is actually something else. Let's turn to the phrase "the cat's meow." It isn't so much that the meow belongs to the cat as it is that the meow comes from the cat. The 's in "the cat's meow" marks not the possessive (in the strict sense of that word) but the genitive, and specifically what we can call the genitive of origin.

The genitive case is a lot like the possessive case. In fact, when people talk about the genitive case in modern English they mostly call it the possessive case. (This is largely because of one very influential 18th century grammarian, Bishop Lowth, who thought "possessive case" was the better term.) This is fine except that because of the meaning of the word possess, it in some cases muddies the semantic waters. For our purposes, we'll stick with genitive case, which is more easily understood as being about control and association as well as ownership.

There are a number of categories within the genitive case, among them the "genitive of origin," which we see in "the cat's meow." Another is the "descriptive genitive," which is exactly how Patricia T. O’Conner and Stewart Kellerman identify "doctor's appointment" on their excellent Grammarphobia blog. The authors describe the pair of phrases thusly:

The term “doctor’s” in the first example is often called a “descriptive genitive,” and “doctor” in the second an “attributive noun,” a “noun adjunct,” or a “noun premodifier.”

There aren’t any hard-and-fast rules for whether to use a noun genitively or attributively as a modifier before another noun. However, some usages are more idiomatic (that is, natural to a native speaker) than others.