The prefix is not your friend

Famous means "widely known." Infamous does not mean “not famous” but rather it means "having a reputation of the worst kind." It may help to remember that infamous is related to infamy which means “evil reputation brought about by something grossly criminal.”

Perhaps you are one of those people who has looked up the word infamous because you can’t seem to quite remember whether it’s supposed to mean “very famous,” “not famous,” “famous (but in a bad way),” or some other thing. If this is the case, you are in excellent company: our records indicate that approximately 88,000 people searched for the word infamous on this site in a recent month. 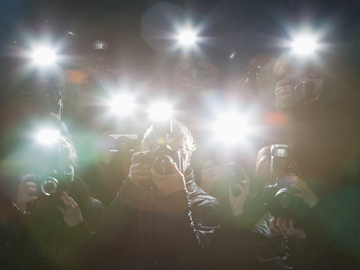 Don't be confused by the prefix: 'in' at the beginning of the word can have any one of several meanings. The 'in' in 'infamous' implies negation, but 'infamous' means “having a reputation of the worst kind," not "not famous."

Origin of Famous and Infamous

Yes, famous and infamous have some similarities (both words are descended from the Latin fama, meaning “fame,” and both often have to do with being well-known), but they have decidedly different meanings. Famous typically carries the meaning of “widely known,” and is often used in a positive manner; infamous, on the other hand, has a negative set of meanings, such as “having a reputation of the worst kind” or “causing or bringing infamy.”

There you have it. One of these words means one thing, and the other word means something else. It’s all very simple isn’t it? No, it is not. Here are a few ways that things which look simple in English are decidedly not so.

The word lock means “to fasten (something) with a lock.” So what does the word unlock mean? If you guessed “to unfasten the lock of” pat yourself on the back. Now let’s move on to another question: if the word thaw means “to stop being frozen” what does the word unthaw mean? If you guessed something along the lines of “to make something frozen,” well, hang your head in shame and befuddlement. The definition of unthaw is “thaw.” Similarly, unloosen is pretty much identical to loosen, invaluable and valuable are much more synonyms than antonyms, and to really muddy the waters we can bring up the issue of flammable and inflammable.

Why must this be so? Was the English language actually created by a cruel and vengeful god, or was it perhaps all put together in a single afternoon by a committee of unlearned and bickering idiots? No, neither of these theories, so far as we can tell, have much evidence to support them. There is a perfectly valid reason for why so many apparently opposite words have the same, or almost the same, meaning, and it has to do with the role played by one of our prefixes.

The prefix we are concerned with here (in-) can have a variety of both meanings and forms. It can take the forms of il-, im-, or ir-, in addition to in-, depending on what letter it precedes. It can mean “not,” (inconclusive), and it can also mean “inward, into, toward” (as in implode or irradicate). And in a final confusing twist, it can also serve as an intensifier, meaning “thoroughly” (which is possibly why so many people think infamous means “very famous”). Infamous contains the version of in- which implies negation, although it does not actually mean “not famous.”

You do not actually have to be famous to be infamous, although we are unlikely to see this latter word applied to a person who is little-known, inconspicuous, or who has not achieved at least some degree of notoriety. If the distinction continues to prove elusive, you can always try to remember that the noun form of infamous is infamy, which has no pleasant connotations, and which was immortalized in our language with its use by President Franklin Delano Roosevelt when he gave a speech referring to the 1941 attack on Pearl Harbor as “a date which will live in infamy.”

MORE TO EXPLORE: 10 Words That Prove Fame Isn't Everything