Must an 'Immigrant' Also Be an 'Emigrant'?

Can you be an immigrant without being an emigrant? Or can you emigrate without immigrating? And what are the differences between immigrant, migrant, and refugee? People have a great many questions about these words, and often appear to be looking for support for an argument (across many political lines) rather than for an actual definition. We will do our best to provide answers to these questions that will leave all of you equally dissatisfied. 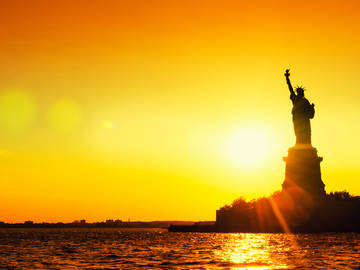 People are emigrants when they leave their country of origin. When they arrive at their destination, they are immigrants.

There is very little difference between immigrant and emigrant semantically; both words refer to a person who leaves one country in order to move to another (generally for a permanent or significant stay). The main difference is that immigrant is used in reference to the country moved to, and emigrant is used in reference to the country moved from. There are several ways of remembering how to distinguish between these words: people are emigrants when they leave their country of origin, and immigrants when they arrive at their destination, or an emigrant is given an additional M when moving to a new country.

The verbs immigrate and emigrate are similarly related in meaning. While the words have been used interchangeably by some writers over the years, immigrate stresses entering a country, and emigrate stresses leaving. You are more likely to encounter emigrate used with the preposition from, and immigrate used with to or into. It should be noted, however, that we have significant evidence of each of these words being used with a variety of overlapping prepositions; the borders between these words are somewhat porous.

All of the above words come, in part, from the Latin migrare (“to move from one place to another”), which also serves, obviously enough, as the source for the English word migrant. A migrant is simply “one that migrates,” although when used regarding people the word most frequently is applied to an itinerant worker who moves with regularity, especially if harvesting crops.

Related to these is the émigré, which is an emigrant, but more fully defined as “a person who emigrates for political reasons.” An émigré may also be a refugee, which is “a person who flees to a foreign country or power to escape danger or persecution.” There are also some situations in which émigrés and refugees are not entirely synonymous, as one may be a refugee due to environmental factors rather than political ones.

However, when we look at words which have descended from migrare, the questions that seem to be foremost on the minds of many are those which are concerned with the word illegal: does immigrant mean that a person has observed all the proper laws in entering a country? Can an immigrant (or any actual person) be illegal? This is the part of the article where we have something to make everyone unhappy.

Our position on the matter is that we will attempt to define the English language as it is used. You may certainly write us angry letters if you would like to see a definition changed, but this will be about as effective as complaining to the authors of an epidemiology textbook when you come down with the flu.