It was a perfectly nice word for centuries

Mean has a number of definitions (a mathematical average, to convey significance, etc.), but the newest and most popular sense is "cruel" or "unkind." This definition developed from the original use meaning "humble or ordinary," which became "lowly" or "immoral," which finally became the common "unkind" definition of today. 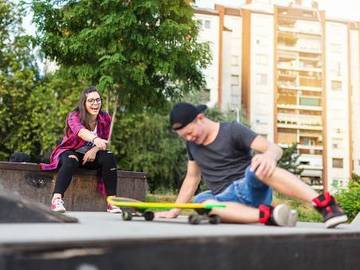 In her defense, it was pretty funny.

From an etymological point of view, there are three means in English. The fact that these unrelated words are spelled the same way and pronounced the same way is just one of the many coincidences seemingly designed to make the language needlessly complicated.

There’s the mean that conveys signification or intention, as in “Novelty means newness” and “she means to win.” It’s the oldest of our means, and has its origins in Old English, related to the Old High German word meaning “to have in mind.”

The one that refers to a mathematical average (“the mean temperature”) came to English from medieval French and derives from the Latin word medianus, which was later borrowed again to give us the related term median. The modern French relative is moyen. This is also the origin of the noun mean, used to mean “average” or used in phrases like “means to an end.”

Finally, there’s the one that most commonly describes something or someone that is unkind or cruel (“mean girls”). And yet, this use of mean as an adjective—without question the most frequently used today—is quite new in English, and was uncommon until around 1900. This unkind newcomer has ungenerously displaced the word’s several older meanings, nearly to the point of eclipsing them.

For example, this word’s oldest use comes from its etymological meaning of “common” or “shared” (from the Middle English word mene) and was initially used to mean “humble,” “ordinary,” or “inferior”:

…to this Major I adde this minor or mean proposition
— John Ponet, An apologie fully aunsweringe by Scriptures and aunceant doctors, 1556

And by knowing the Nature of Salt Peter Sulphur and Charcoal those mean Ingredients mix’d we can shake the Air in the most terrible Manner
— Benjamin Franklin, “On the Providence of God in the Government of the World,” 1732

Mean was used by extension to describe people of humble or non-noble birth, sometimes having the meanings “common” or “lacking distinction.” This is the way mean is used in the King James Bible and in Shakespeare:

…as the mean man is inferior to the riche in those poinctes, whiche by fortune bee denied hym
— William Painter, The palace of pleasure, 1566.

And the mean man boweth down, and the great man humbleth himself: therefore forgive them not.
— King James Bible, Isaiah 2:9

There is none of you so mean and base / That hath not noble lustre in your eyes
— Shakespeare, Henry V

Chuzzlewit whose paternal lineage is considered mean and low, though unknown, and who doesn't clarify the matter on his deathbed.
— Charles Dickens, Martin Chuzzlewit, 1844

The word demean is derived from this sense of mean; demean literally means “to make humble” or “to make lower.” When not referring specifically to social class, mean was used more broadly as a synonym of “humble” or “shabby”:

It was a dark, wet, gloomy night in autumn, when in an upper room of a mean house situated in an obscure street
— Charles Dickens, Nicholas Nickleby, 1839

In the dim light I could make out that the person who had opened the door was a small, mean-looking, middle-aged man with rounded shoulders.
— Arthur Conan Doyle, "The Greek Interpreter,” 1893

"He's in disgrace." The words in that clear, child's voice, had the ring of a bell tolling, but she went on: "Coming out in that beastly rat-catcher coat and mean little tie.”
— Evelyn Waugh, Brideshead Revisited, 1945

This sense was used occasionally in the phrase “mean streets,” referring to the humble neighborhoods where poor people lived. This is obviously not the connotation that we might have today, particularly influenced by the Martin Scorsese film Mean Streets from 1973, which is probably understood by most to mean “cruel streets.” The original meaning of the term may, however, also apply to the story of small-time criminals with money troubles. Note that the word kennel, used in our first example, has a definition in our Unabridged dictionary that reads “a house or other dwelling place regarded as unfit for human residence”:

Out of the kennels of mean streets, whose meanness marble palaces and flowering gardens screen
— Robert Welles Ritchie, Harper’s Magazine, 1912

In the sordid surroundings, then of the mean streets of great cities there are developing in women practical wisdom and a fine sense of individual responsibility.
— Harriot Stanton Blatch, The Outlook (weekly magazine), 1916

…women, in rich furs, were getting out of luxurious cars. It was the world that Stephen knew […] yet he realized suddenly, with a sensation of loneliness, that here, not in the mean streets, he felt, as Vetch would have said, “stranger than Robinson Crusoe.”
— Ellen Anderson Gholson Glasgow, One Man in His Time, 1922

In the first half of the 20th century, mean is used as an adjective mostly in the sense of “humble” or “worthy of little regard” in a negative construction. A survey of the adjective’s use in TIME magazine in the 1920s reveals the following formulations:

Another sense of the word continues the idea of “lacking nobility” or “lacking distinction” and adds a moral element, resulting in usage that conveys “lacking dignity or honor,” “unprincipled,” “low,” or “base”:

There is something too more mean and dastardly in the Character of an indirect Lyar than a direct one. This has the Audacity of a Highwayman, That the Slyness of a Pickpocket.
— John Webbe: The Detection, 17 November 1740

I was a precocious actress in her eyes; she sincerely looked on me as a compound of virulent passions, mean spirit, and dangerous duplicity.
— Charlotte Bronte, Jane Eyre, 1847

“She took possession of my small property, procured a divorce through an unprincipled lawyer, and I returned to find myself without wife, child or money. Wasn't that a mean trick?”
— Horatio Alger, Driven From Home, 1889

This moral component of the word’s development led in two directions. On the one hand, it came to mean “ungenerous,” “cheap,” or “stingy,” a usage that is chiefly British:

"I would not wish to do any thing mean," he replied. "One had rather, on such occasions, do too much than too little. No one, at least, can think I have not done enough for them: even themselves, they can hardly expect more."
— Jane Austen, Sense and Sensibility, 1811

I have to agree with you re [Charlie] Chaplin being mean & cheap, he never to my knowledge ever had any consideration to anybody—financially or otherwise.
— Stan Laurel, letter to Ed Patterson, 1957

When we finally arrive at the use of mean to signify “unkind” or “cruel,” we often see it in informal contexts, and frequently in the dialogue of young characters—the depiction of American youth slang of the day, sometimes even put in scare quotes that betray that newness:

I decided in my own mind that Mr. Maxwell was a ‘mean old thing’ to throw away my story and keep the return postage.
— Gene Stratton-Porter, At the Foot of the Rainbow, 1907

“Gentleman friend gone back on you? Say, Matt, that's tough! No, I wouldn't be mean enough to tell the other girls. I ain't as low-down as that.” (How Frome hated his cheap banter!)
— Edith Wharton, Ethan Frome, 1911

The usage then moved from dialogue to narration, retaining a somewhat informal tone:

His mother did not say this in a mean way. She seemed worried.
— Ernest Hemingway, Soldier’s Home, 1925

This sense of mean was first entered in a Merriam-Webster dictionary in the giant 1934 edition of the Unabridged, and given the label Colloq., U.S.: “Characterized by petty selfishness or malice; contemptibly disobliging or unkind; ill-tempered; fractious.”

The use of mean for “cruel,” “unkind,” or “harsh” has since become so widespread in American English that we usually find these other uses to seem unusual or archaic—or we misunderstand what authors from earlier centuries intended. Indeed, one of the few vestiges of earlier meanings of mean is retained in the idiom no mean feat, and another we find in phrases like “she plays a mean trumpet,” both of which require surrounding context and syntactical clues for mean to be understood correctly, if you take our meaning.