The word has a different meaning in French

The word chef, meaning “a skilled cook,” is a common word in English today, and it’s not even surprising to most of us that it originally comes from French. What is surprising is how recently it was still considered a “foreign” word: it was labeled as “foreign” in a Merriam-Webster dictionary until 1934. 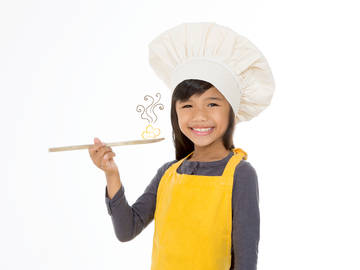 Though 'chef' is a common word in English, it has a different meaning in French—and was already borrowed to create the word 'chief' some five centuries before we started using it to mean "skilled cook."

Given that so many fancy food terms come from French—think of sous vide, chiffonade, crudités, and even à la carte and the term haute cuisine itself—another surprise is that chef by itself has no specific connection to food or cooking at all: it’s the French spelling of the word that gave us chief, meaning “boss” or “leader.” The “skilled cook” meaning of chef is an abbreviated form of chef de cuisine, meaning “kitchen head” or “kitchen chief.” Like some other words that have come to English from French, chef was borrowed twice; the first time it became chief with a general meaning of “leader,” and then, some five centuries later in the 1800s, it was borrowed again with the more specific meaning. Typically, these more recent borrowings retain French spellings. Chef itself meant “head” in Old French, and comes from the Latin word for “head,” caput.

Besides chef de cuisine, the 1934 Unabridged edition included chef de cabinet (“private secretary”) and chef de train (“railway guard” or “conductor”). In later editions, chef d’ école (“leader of a school of artists”) was added. Another chef term refers to a leading work of art rather than a leader who is a person: chef d’oeuvre, pronounced \sheh-deuhvr\ in French and \shay-deuhvr\ or \shay-DERV\ or \shay-DUV\ in English. It is a synonym of masterpiece.

Another truncated French term that is used in restaurants is maître d', meaning “headwaiter” or “manager.” Maître is one of those twice-borrowed French words; it is simply the French spelling of master. But maître d' is a very unusual word because the d’ seems like a cliffhanger: if de is the French equivalent of of and d’ simply its abbreviated form that is used before a vowel, what is this person a “master” of? The full term is maître d'hôtel, which literally means “master of house” (hôtel being a word still used in French to designate a grand house as well as a place where travelers can rent rooms). A parallel term that came from the cousin Romance languages of Spanish and Italian is majordomo. The clipped form maître d' began to be used in American English in the 1940s, and though a maître d' is clearly in charge in a restaurant’s dining room, back in the kitchen, there’s no question as to who is the chief.