Here's a pair of words: gambit and gamut. Though spelled differently enough, their pronunciation is almost identical because of the schwa vowel sound in the second syllable of both: 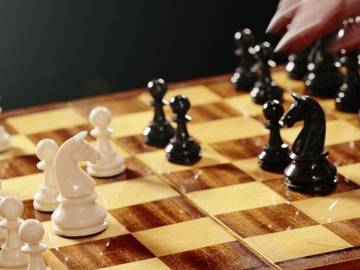 The gauntlet has been thrown down.

It's perhaps for this reason that the less common word—gambit—sometimes is used where the context in fact calls for gamut. See if you can put each in its place in the following two sentences:

In a ____ to distract Mabel the Cat from the ennui that had been plaguing her of late, Harry the Dog performed a little soft shoe.

Mabel was pleased to eventually learn that Harry's dancing skills ran the ____ from ballet to B-boying.

Did you put gambit in for the first one and gamut in for the second? Well done. Now we'll look at why each goes where it does.

As discussed, gambit is the less common of this pair. It's most often used to refer to something done or said in order to gain an advantage or to produce a desired result, as when Harry did his little dance for his friend. Gambit often appears in the phrase "opening gambit," where it means "first move." The original opening gambit is a chess move—a player's first in a game—in which a bishop's pawn is sacrificed to gain some advantage. Later, the word came to refer to other chess openings as well.

The word gamut is most often used to mean "an entire range or series," as in the sentence about the wide range of Harrys' dancing skills. That's the word's metaphorical use. Gamut originally referred (and still does refer, for those in the know) to the whole series of recognized musical notes. Even that meaning, though, constitutes a straying from the word's roots: gamut comes from a Middle English word for the lowest note on the musical scale developed by an 11th century musical theorist.

We most often see gambit misused for gamut in the phrase "run the ____." To remember that it's run the gamut perhaps consider the "u" in both run and gamut.

The phrase "run the ____" is frequently completed with another g-word, but to communicate an entirely different meaning. If you "run the gauntlet" you endure a trial or ordeal. Here's an example:

Once the media understood the extent of Harry's dancing abilities, he and Mabel couldn't leave the house without running the gauntlet of paparazzi.

This gauntlet (and there is another) originally referred to a trial of a particularly awful variety. It was a military punishment in which a prisoner was made to pass between two rows of men armed with (and using) clubs or other weapons. The original name of the punishment in English was gantlope, from the Swedish gatlopp (from gata, meaning "road," and lop, meaning "course"). Gantlope was a bit funny-sounding to the English ear, though, and through a process called "folk etymology" gantlope morphed into the already-familiar gauntlet. (Note that gantlet is a centuries-old spelling variant of gauntlet. You can use "run the gantlet" if you like, but it is significantly less common.)

By the time gantlope had become gauntlet, the earlier sense of gauntlet had been part of the language for about 200 years. It referred first to a protective glove worn with medieval armor, and then to other kinds of protective gloves, and eventually to gloves worn for dressy occasions. (It comes from the Middle French word gantelet, a diminutive of gant, "glove.") Medieval custom took those protective gloves pretty seriously: to "throw down the gauntlet" was to issue a challenge; to "pick up the gauntlet" was to accept one. Those phrases (which can very occasionally be found with the gantlet spelling as well) are used metaphorically still:

Harry the Dog knew that, though shy, Mabel the Cat was also a fabulous dancer, and he challenged her to a dance-off in full view of the paparazzi. Mabel the Cat picked up the gauntlet: decked out in her best beret, she faced her audience and began to moonwalk.

Here concludes the story of gambit, gamut, and gauntlet. Now go forth, and be inspired by Mabel and Harry: in a gambit to interest your readers, pick up the gauntlet and show the full gamut of your lexical skills. Use these words well. And if you can do it while dancing, better yet.