Is it espresso or expresso? Yes

If you're trying to win your argument, you've come to the wrong place.

Espresso is the word borrowed from Italian to refer to coffee brewed by forcing hot water through finely ground usually darkly roasted coffee beans. In Italian this word was probably coined to mean "coffee made on the spot at the customer's request," to distinguish espresso from coffee brewed in a pot. In English we sometimes say that an individual serving of something, such as espresso, is made "expressly for" someone, and it so happens that express shares roots with espresso, making the widely used variant expresso both logical and etymologically defensible.

At Merriam-Webster, we believe that coffee is the greatest invention in the world, perhaps short of the printing press. (The Internet loses a few points because of YouTube comments.) The energy boost provided by a well-timed cup of espresso is what gets our lexicographers through the livelong day.

Only, it seems, not everybody agrees on how to spell it. 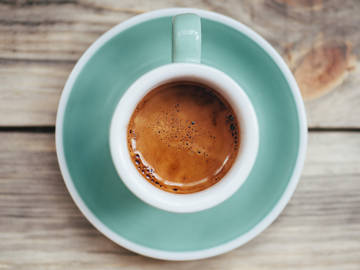 Whatever you call it, it has to be Instagram-ready.

Espresso refers to coffee that is brewed by forcing steam or hot water through finely ground, usually darkly roasted coffee beans. In the past, the term has also variously referred to the machine used for preparing said coffee or to the establishment where this coffee is prepared and sold. In Italian, this coffee is known as caffè espresso, or just espresso for short.

They were the ones who had bought the silver caffe espresso urn and later the television, and they arranged the pizza parties and had the girls down ...
Bernard Malamud, The Magic Barrel, 1958

And sometimes when I am walking down the King's Road or sipping my espresso in the morning—feeling, not old exactly, but fusty and adult—and chance to remember the island, immediately all things are possible.
Muriel Spark, Robinson, 1958

A Turin-born inventor, Angelo Moriondo, was awarded the patent for "new steam machinery for the economic and instantaneous confection of coffee beverage" in 1884, but the term espresso wasn't used until later, after the machine had been perfected by Luigi Bezzerra and Desiderio Pavoni.

By the middle of the twentieth century, around the time a café owner named Achille Gaggia patented the first modern espresso machine for commercial use (and the first that produced the crema that we associate with espresso today), the term espresso had made its way into English.

Because of the similarity of espresso to the English word express—and the promise of coffee being prepared with relative swiftness in contrast to percolating devices—it naturally caught on for espresso to be interpreted as expresso, and consequently spelled as such. Espresso machines operated faster than percolators, delivering the coffee to the customer at a speed requiring less of a wait.

Montreal night-life can be inexpensive or costly. If you care to budget severely there are coffee houses where a cup of expresso costs only 15 cents.
Charles J. Lazarus, The New York Times, 27 Nov. 1955

Origins of Espresso and Expresso

Expresso has been regarded as a misspelling by usage experts, who scoff at the deviation from the original Italian. Those experts are emboldened in their disapproval for the spelling by an early theory surrounding the word's etymology. The espresso in caffè espresso, it was believed, pertained not to the "express" nature of brewing but to the fact that the coffee was "pressed out," espresso being cited as a past participle of esprimere, from Latin exprimere, meaning "to press or squeeze out." But, as it turns out, there's a problem with that reasoning.

Exprimere does indeed mean, among other things, "to press or squeeze out" in Latin. It's also an ancestor of our word express, which has among its meanings "to force out (something, such as the juice of a fruit) by pressure"—which accurately describes what takes place when espresso is made: hot water is forced through the grounds by way of steam pressure (approximately nine atmospheres' worth).

But current etymological theory says that it's more likely that the Italian term caffè espresso was coined to refer literally to coffee made on the spot at the customer's request, and not to point to the "pressing" method by which it's made.

That has caused etymologists to rethink the connection of espresso to the pressing out of coffee beans and back toward the method of delivery—coffee made to order "expressly" for the customer.

So does this mean we've been wrong about expresso all this time? Yes and no. Espresso remains the original borrowed word for the beverage, but expresso shows enough use in English to be entered in the dictionary and is not disqualified by the lack of an x in its Italian etymon. Just think of expresso as a quirky, jittery variant.