What Does it Mean to "Endorse" a Presidential Candidate?

And how does it relate to "endorsing" a check?

In presidential election years, certain words pop up in our lookup data, words that get dusted off for a short while before receding from the news, put back in the closet until we need them again—words like caucus, presumptive, and, oh yes: electoral college. Terms that exhibit short spikes of interest are often either common terms used in an unusual way or—as with these—unusual terms used so frequently as to become briefly common. 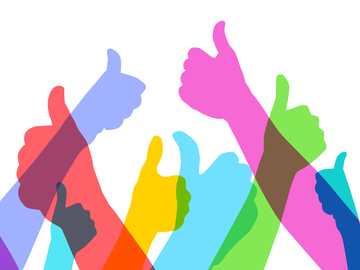 Although "endorse" has been used in English for more than 600 years, the figurative meaning “to approve openly” is much more modern

But some words that do the hard work year in and year out seem to pass without notice. They are frequently used but periodically have special significance or specific meanings. In election years, endorse is such a word. It carries a lot of meaning on its back, and for good reason: it comes from the Latin word dorsum, meaning “back.”

Dorsum is the root of dorsal, meaning “relating to or situated near or on the back especially of an animal,” as in dorsal fin. That literal meaning of “on the back” is also the origin of endorse, which meant “to write on the back of a document” in texts going back to before 1400. This could be simply a signature (as in “endorsing a check”), or it could be a more elaborate note such as approval of a promotion in the military or a specific notation of a driving violation on one’s license.

The figurative meaning “to approve openly” or “to express support or approval of openly and definitely” is much more modern, dating to the 1800s. An early use makes reference to the nominating convention of the Democratic Party in 1844, but could easily be imagined as a line from election coverage today; only the names would change:

Endorse wasn’t initially only used in political contexts; an early use by Ralph Waldo Emerson in 1847, cited in the Oxford English Dictionary, shows that it also had a much broader meaning, referring to ideas and authors rather than specific political parties or candidates:

This book of Montaigne the world has endorsed, by translating it into all tongues.

Endorsement followed endorse into the language in the mid-1500s.

With its origins on binding legal documents at a time when the written word was precious and the tradition of written laws was being established in England, endorse has retained its strong meaning: putting your name behind a candidate means, figuratively, carrying that candidate’s record, reputation, and actions on your back.