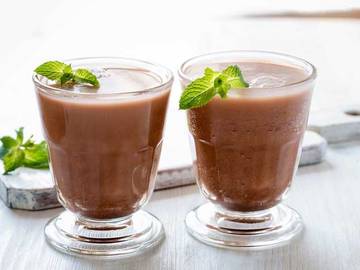 The secret ingredient is intrigue.

What Is an Egg Cream?

Before we get to the origins of this drink, what is an egg cream? We define it in the following manner: “a sweetened drink made with milk or cream and other ingredients; especially, a drink consisting of milk, a flavoring syrup, and soda water.” This is a definition which doubtless will be unsatisfying to some, as the egg cream partisans (many of whom are New Yorkers, particularly Brooklynites, of a certain age) have a far more rigid definition of what makes an egg cream. The fabled egg cream of the 20th century is thought of by these partisans as authentic only if it is made with certain ingredients (milk, seltzer, and chocolate syrup), if the chocolate is a specific brand, and if the seltzer is from a soda fountain, rather than a bottle. While we do not dispute that this may well be the best egg cream, there is sufficient linguistic evidence of many other kinds of this drink that we have a broader definition.

Why Is It Called an Egg Cream?

It is not only the ingredients of the egg cream that are oft-disputed; the matter of where it originated, and why it is so called are also subject to contention and rancor. As we are lexicographers, and not historians of bibitory things, there is a limited amount of light we can shed on the beginnings of the egg cream, and why, despite the fact that it contains neither egg nor cream, we call it by this somewhat unappetizing name.

The egg cream is often said to have originated come from certain parts of New York City (such as Brooklyn or the Lower East Side), in the late 19th or early 20th centuries. Explanations for the name include theories that the egg is a corruption of a Yiddish word meaning "authentic, genuine," or that it was a mistaken translation of a Parisian drink made with chocolate.

One problem with all these theories is that we have evidence of egg cream being used as a name for drinks (which did have cream and eggs in them) as early as the first half of the 19th century. The earliest recipes we know of made no mention of syrup, chocolate or otherwise, but by the end of the 19th century it appears to have been commonly added, along with eggs, in drinks served at soda counters.

EGG CREAM.
Take the yolk of an egg, with a dessert-spoonful of cream, or new milk, and if convenient, add two drops of oil of cinnamon; this will form a mixture sufficient to serve three people to mix with their tea; for cream being chiefly the oil of the milk, and the yolk the most nutritive part of the egg, they are both lubricating and nourishing.
— The Hereford Journal, (Hereford, Eng.), 18 Jul. 1838

There are egg pepsin tonics, which are variations of phosphate, and egg-cream and egg-celery phosphate and egg chocolate and pineapple egg, and an endless list, closing with that whose musical, reversed alliteration is not needed to assure that its popularity will never wane—egg-nogg.
— The Virginia Enterprise (Virginia, MN), 12 Jun. 1896

While they may not enjoy the same popularity now that they did in the beginning of the 20th century, we used to routinely add eggs to all kinds of drinks, including phosphates, coffee, and lemonade.

It is certainly possible that there have been multiple egg creams, some of which may be unrelated to others. The egg creams of the Lower East Side may indeed have been so named from Yiddish, or in imitation of a French drink. However, we do have to point out that there is considerable lexical evidence for egg creams, made with and without eggs and cream, over the last 180 years, across a wide geographic range. This evidence does not so much definitively answer any questions about the name and origins of the egg cream as much as it muddies the waters, making it seem likely that egg cream will join words such as jazz, which have histories that are subject to endless theorizing, but never fully explained.

MORE TO EXPLORE: Turns Out You Can Unboil An Egg