Do Burglars 'Burgle' or 'Burglarize'?

Burglary: it's the no-good act of illegally entering a building with the intent to commit a crime—especially the theft kind of crime. The person who does it? A burglar.

If you want a verb for a sentence about a burglar committing burglary you have two perfectly legitimate options: burglarize and burgle. 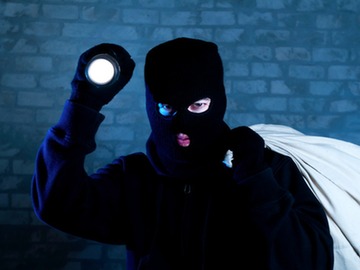 If you're British, chances are you'll prefer the second. If you're American, chances are burgle makes you giggle, and you'll opt for burglarize.

Both burglary and burglar date to the 16th century (currently, our earliest evidence for the pair dates to 1523 and 1540, respectively). It wasn't until 300 or so years later that a need for an obviously related verb was felt compellingly enough to give rise to the options we possess today. (The more general rob had been doing the job in the interim.) Burglarize appears to be the older of the two, by a few decades. The earliest known example of the word appears in an 1840 essay entitled "Steeple-Chasing in Ireland," by an Irish fellow writing under the pen name Shamrock, and published in The Sporting Review:

In this dilemma there were but two resources open to the infuriated stewards,—one to carry the key vi et armis; the other, to burglarize the cellar.

Our earliest evidence of burgle is from 27 years later, in The Hartford (Connecticut) Daily Courant, 15 Oct. 1867:

The store of Elihu Potter of Noauk was burgled, Friday night, of articles of small value.

This places the origin of each word on the shore opposite the one we'd expect, but there you have it.

The words are both formed from burglar in regular ways: burglarize belongs to the group of words formed by the ever-productive (and often scorned) -ize suffix, and burgle is formed by back-formation. In the 1890s some people used the word burglar as a verb too. Mark Twain (in the 1896 Tom Sawyer sequel, Tom Sawyer, Detective) was one:

They used to hear about him robbing and burglaring now and then, but that was years ago.

The verb burglar is no longer in use, which means that unless you want to go all archaic on your listeners/readers your options are burgle and burglarize. Burglarize is, as we said above, the more common choice in the United States, but burgle is slowly making inroads on this side of the pond. Burgle is emphatically the choice in British English. Both were once disparaged by grammarians, but they're perfectly acceptable now.

More obscure than either of these, but also perfectly acceptable, is another related pair of words: burglarious and burglariously. They mean what they sound like they mean—that is, burglarious means "relating to burglars or burglary" and burglariously describes what is done in a burglarious way—and they have the added bonus of a ring of the absurd about them too.