The rule of thumb for words about rules

The Latin verb regere means "to rule" and gives us a range of words, from government of the state to management of the self, among them regent, regal, and royal, as well as rigid, right, and correct.

The two words derived from regere that perhaps most often get confused are regimen and regiment. 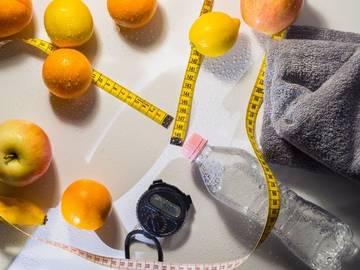 Pictured: the accessories to a regimented fitness regimen.

Regimen might make you think of medicine or exercise. Generally speaking, a regimen is a systematic plan or course of action. It is often specifically applied to a plan for, say, administering medication, following a diet, or taking care of something pertaining to the self:

Wilson also attributed it to the core and shoulder work he does as part of his training regimen. He has a full-time trainer, Decker Davis, and a full-time physical therapist, Janet Jin.
— Brady Henderson, ESPN.com, 5 Oct. 2017

A regiment is a body of soldiers commanded by a colonel and consisting of a variable number of companies, troops, or batteries, as in the 54th Massachusetts Regiment.

About 180,000 black troops enlisted in the Union Army, spread over about 160 regiments, and while historians have been aware of the contributions of the U.S. Colored Troops, the soldiers were usually tracked from where they were recruited, not where they were born.
— Matt Kelly, UVAToday (University of Virginia), 16 Oct. 2017

Regiment is also a verb meaning "to form or assign to a regiment" or "to organize rigidly especially for the sake of regulation or control," as in "The parents carefully regimented their children's after-school activities." Because it often appears in the form of its participial adjective, regimented, and can describe systematic plans or similar things that might also be called regimens (as in "she followed a regimented workout routine"), this may be the root of the regimen/regiment confusion.

A third word to remember is regime, borrowed from French (as in the phrase ancien régime, used to describe the political and social system of France before the Revolution of 1789, or, more broadly, any once-flourishing system or mode that is no longer prevailing).

In English, regime can be used synonymously with regimen (as in "a study regime"), but more commonly it tends to describe a government in power. The word, notably used during the administration of President George W. Bush in the phrase "regime change" to refer to the overthrow of Saddam Hussein, sometimes comes with a connotation of oppression:

The regime of President Bashar al-Assad doesn't officially recognize Rojava's autonomous status, nor does the United Nations or NATO-it is, in this way, just as illicit as the Islamic State.
— Wes Enzinna, The New York Times Magazine, 29 Nov. 2015

We hope this all helps you keep your vocabulary organized rigidly for the sake of control.