Herb vs Spice: A Debate

If variety is the spice of life, what's the herb?

What's the difference between an herb and a spice? And how do you say 'herb' anyway? These are two very good questions, but only the second one is easily answered, so we'll start there.

Most Americans pronounce herb as though the h does not exist; based on how we say it, it could very well be spelled erb. In British English, however, it's typically pronounced like it's short for the name Herbert. Such was not always the case: the Oxford English Dictionary tells us that the h wasn't pronounced until the 19th century, which means that herb arrived on American shores without an audible h. 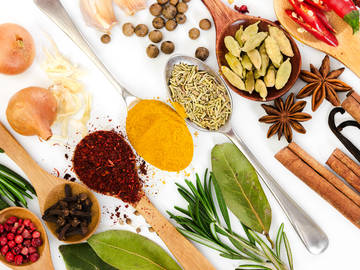 Do with that what you will. However you say herb, the distinction between what that word refers to and what its frequent linguistic companion spice refers to can be less than clear. Oh, at first the categories seem distinct enough: herbs are leafy things, like basil, tarragon, thyme, and cilantro; and spices are seeds, either whole or ground, like coriander, cumin, and anise. Leaves vs. seeds is indeed a simple version of the separation. But simple isn't always accurate.

Pepper is a good case in point. Very little is simple there, starting with the fact that the pepper of "salt and" is botanically distinct from all the other peppers. It comes from an Indian vine that produces berries that when dried and ground up sometimes wind up in a cute pepper shaker. The other peppers are the fruits—technically also berries—of a group of plants that are native to South America and known to those in the know as capsicum. That's right: pepper, whether in the shaker or in the sriracha, is essentially a fruit. But we think of both as living in the spice aisle.

Bark is also neither leaf nor seed, nor is it fruit, but when it's a particularly prized bark like the bark of a tree of the genus Cinnamomum it's used as a spice: cinnamon. Rhizomes and bulbs (ginger and garlic are these respectively, and more visibly so in the form we find them in the produce aisle) are also typically considered spices, especially when in their dried powder forms. But then we have saffron, the fantastically expensive spice that is the whole or ground stigmas of a purple crocus flower, and cloves, which are dried flower buds. But not all flowers get the spice treatment: nasturtiums and orange flowers are sometimes found in the "herb" category.

When we step away from the culinary realm and into the scientific one, another complication arises. Botanically, an herb is a seed-producing plant that dies down at the end of a growing season. These herbs, which can be annuals, biennials, or perennials, are contrasted with bushes and trees, which develop woody tissue that persists over a series of growing seasons. The consequences of this "herb" designation can be a bit shocking: the towering thing we commonly call a banana tree (which can grow to 20 feet) is technically an herb because it dies down (or in cultivated banana plants is typically cut down) after it produces its single bunch of bananas. And a considerable number of spices, among them turmeric, cardamom, and cumin, come from plants that are botanically herbs.

What does all this mean? Well, if you've come to the dictionary to settle a heated dispute about what the difference between an herb and a spice is, perhaps the heat has dissipated a bit. The real answer is: it's complicated. Nuance, though, isn't a bad thing. In fact, we think it adds a certain piquancy to the language that makes savoring each word all that more worthwhile.