Nobody wants to be either, but they're not the same.

While you may not have been getting enough sleep lately, take it from us: you're not sleep-depraved.

Depraved and deprived look an awful lot alike. Just that one vowel in the second syllable distinguishes them in appearance. But in meaning, there's way more going on. 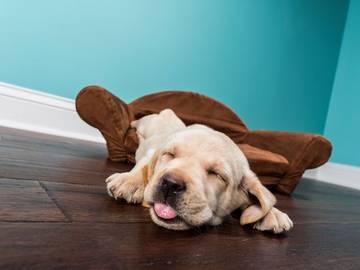 SO. TIRED. FROM. ALL. THAT. IMPORTANT. WORK.

Depraved is an adjective meaning "very evil," or "having or showing an evil and immoral character." It is useful for describing awful people and other objectionable creatures:

Alas! I had turned loose into the world a depraved wretch, whose delight was in carnage and misery; had he not murdered my brother?
— Mary Shelley, Frankenstein, 1818

The hatred which some of his order feel for Socialists and Demagogues Lord Marshmoreton kept for roseslugs, rose-beetles and the small, yellowish-white insect which is so depraved and sinister a character that it goes through life with an alias—being sometimes called a rose-hopper and sometimes a thrips.
— P. G. Wodehouse, A Damsel in Distress, 1919

Depraved the adjective comes from the uncommon verb deprave, which usually means "to corrupt morally," as in "claims that the video game may deprave children."

Deprived, on the other hand, is often observed as the past tense of the verb deprive, meaning "to take or withhold something from someone." It is useful for talking about lacks of various kinds:

Darkness had no effect upon my fancy; and a churchyard was to me merely the receptacle of bodies deprived of life, which, from being the seat of beauty and strength, had become food for the worm.
— Mary Shelley, Frankenstein, 1818

My friend's temper had not improved since he had been deprived of the congenial surroundings of Baker Street.
— Arthur Conan Doyle, The Return of Sherlock Holmes, 1904

Deprived also functions as an adjective with the meaning "not having the things that are needed for a good or healthy life." It's useful for describing the effects of diets ("avoiding deep-fried cookies makes me feel deprived") or for mashing together with others words to describe people and things not getting what they need ("sleep-deprived parents," "water-deprived plants").

Depraved and deprived each also have a related noun. Depravity typically refers to either a very evil quality or way of behaving, as in "a life of utter depravity," or to an evil or immoral act, as in "the depravities of war." Deprivation typically refers to the state of not having something that is needed—that is, the state of being deprived of something, as in "the effects of sleep deprivation."

To keep this pair straight, you'll in most cases be safe if you remember this: use deprived if something is being taken away or kept from someone; use depraved if you want to describe what is evil or just plain immoral.