We all understand that some words change over time, drifting away from their original meanings. Sometimes the original meaning remains in use but becomes hidden in plain sight when it’s not the primary way we think of the term. Case in point: decadent. 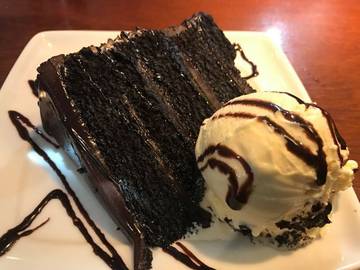 By far the most common words described by decadent are:

Followed by others in a similar category:

We understand a “decadent dessert” to be one that is indulgent or luxurious, but there is another category of words modified by decadent that shows that the word has a slightly different meaning as well:

This use of decadent more closely reflects the etymological roots of the word: decadent derives from decadence, which comes from the Latin verb decadere meaning “to fall” or “to sink.” The real clue to where decadent began comes from its cousin, another word derived from decadere: decay. Noah Webster defined decadence in 1828 only as a synonym of decay. Early examples clearly mean “decay” or “decline”:

…all manual trades in that nation are now almost totally failed, and have fallen of late into such a palpable decadence, that hardly shall a man be found, where these men have being that can make a pair of boots aright, or taylor skilful enough to apparel one in the fashion, although he see the patern before him…
— Sir Thomas Urquhart, Logopandecteision, or, An introdvction to the vniversal langvage digested into these six several books, 1653

…the Kingdomes body might faint and fall into decadence…
— John Fowler, The history of the troubles of Suethland and Poland, 1656

…that as other princes have their eyes on him, so he hath his eyes on the king of great britain: wherefore, although for these two or three years past affairs on this side have gone in a continual decadence, and a final ruine be now threatned, unless it be withstood by some princely resolution, not of petty but of great princes…
— John Rushworth, Historical collections of private passages of state Weighty matters in law, 1659

Sometimes a moral component was also part of the meaning of this word, a judgment that the decline was evidence of a flaw, error, or sin. In this it echoed the usage of the word in French, its direct source into English. Here the French term is used, then translated:

…now, if man, who is so considerable a part of the world, doth decay in his species, 'tis a shrewd symptom that the whole is en decadence, in a declining state; now, that man doth impair as well in his intellectualls and the faculties of his soul, as in the motions and affections of his heart...
— James Howell, Thērologia, The parly of beasts, 1660

It took a couple hundred years after decadence was established for decadent to appear in English, sometimes referring to an excess of something but with no particular moral judgment:

He proves that the trade of the Company with China has increased in the quality and quantity, while it has proportionably decreased in the price, though not value of its articles; and yet that the price of the American articles, particularly teas, has increased, with a decreased demand and a decadent supply.
— The Observer (London), 26 Feb. 1832

Such neutral usage of decadent was soon eclipsed by moral judgment. At some point, this word that described the excesses associated with social and moral decay (“a decadent society”) came to refer more to the excess than to the decay. This slight shift in meaning gave decadent the use defined as “characterized by self-indulgence,” which is how treating yourself to that piece of chocolate cake came to seem less like decaying and more like luxury.