The Difference Between 'Credulous' and 'Credible'

We want to believe!

Credible describes a person or thing that is trustworthy, or something that is plausible. Credulous describes a readiness to believe, especially on slight evidence. Its is similar in usage to "gullible." Creditable also means "worth of trust," but also mean "worthy of praise."

The Latin verb credere, meaning "to believe or trust," is the source of a plethora of English words pertaining to belief and trust, including creed, credence, credo, and credit. 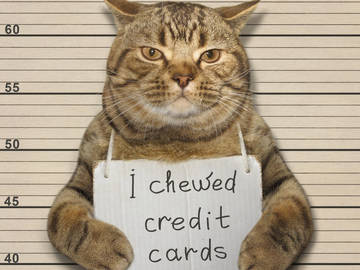 This handsome cat's original story was not creditable.

Trust works two ways, and maybe that's why some credere-derived words are liable to be confused with one another. Take, for example, credible and credulous.

How to Use Credible

Credible describes a person or thing (such as a claim) that is likely to be believed or worthy of being believed:

Dearman cross-examined Rogers asking if he thought Wallace was a credible witness. Rogers said he did find her to be credible since she was the only other person in the room at the time.
Prescotte Stokes III, AL.com (Alabama), 18 June 2017

Much has been written on the history of the Negroni, the most credible story being one of an Italian count Negroni who, in 1919, asked the bartender at Caffe Casoni to boost his Americano (Campari, vermouth and soda) by subbing gin for the soda.
M. Carrie Allan, The Washington Post, 7 July 2017

Moreover, there is no credible evidence that Fridays falling on the thirteenth of a month represented jinxed dates for the United States Navy.
Joe Nickell, Skeptical Inquiry, September/October 2004

Credible is a synonym of plausible and of course, is related to incredible, a word that sees more frequent use in describing something so amazing as to not be believed (as in "an incredible sunset" or "an incredible coincidence").

How to USe Credulous

Credulous, meanwhile, means "ready to believe especially on slight or uncertain evidence" or "proceeding from such a readiness to believe":

Richard Horne's vehicular manslaughter is coming to light as well—or it would be, if credulous Andy weren't so willing to let a suspect promise to meet him later and tell him everything then.
Jess Zimmerman, Vice, 19 June 2017

Journalists are vigilant defenders of truth when the subject is president Obama's birthplace or OPEC prices. They are credulous when it comes to explaining populist movements. They assume the impetus always comes from the demand side.
Christopher Caldwell, Newsweek, 9 May 2011

This credulous fascination with prophetic knowledge helps explain the presence of the five larger-than-life female figures-sibyls from Greek and Roman mythology-in Michelangelo's fresco. The sibyls were soothsayers, women who dwelled in sacred shrines and predicted the future in fits of inspired madness, often using obscure utterances such as riddles and acrostics.
Ross King, Michelangelo and the Pope's Ceiling, 2003

Credulous has a close synonym in gullible, a word that, despite rumors to the contrary, is indeed in the dictionary.

How to Use Creditable

A third word that gets tossed into the mix is creditable, which, like credible, can also mean "worthy of belief":

"How many times?" Harry asked, with a creditable imitation of politeness.
J. K. Rowling, Harry Potter and the Order of the Phoenix, 2003

The show of force and how quickly MPD mobilized demonstrates that investigators are moving on clues that proved creditable one day but fell apart the next.
Greg Coy, Fox13Memphis.com, 15 June 2017

But creditable can also mean "sufficiently good to bring esteem or praise":

He played, Erica said, with "great passion, great brio," and, if not with genius, at least with creditable skill-an astounding feat for someone with virtually no musical background who, at forty-two, had taught himself to play.
Oliver Sacks, The New Yorker, 23 July 2007

Overlap Between 'Credible' and 'Creditable'

Credible sees occasional use in this latter sense:

By the age of six he could sketch a credible and expressive human figure, a skill that came as easily to him as repeating a melody after a single listen. With his colored pencils and sheets of paper, he was as good as gone.
Laney Salisbury et al., Provenance, 2009

This is not a surprise given the welcome, gracious atmosphere, the uncommon competence of the kitchen, with its familiar Little Italy Italian menu (I had a nice linguine and clam sauce there once, and left smiling), and the restaurant's credible wine list.
Mark Bittman, The New York Times, 26 June 2002

Both words can be used to describe things that, rather than deserve belief, deserve an acknowledgment of credit, the kind we speak of when we say "She was given credit for her contributions." So, if you were to say that credible could be conflated with creditable, we'd say that's a credible theory.