A simple mnemonic device should help

Concave means "hollowed out or rounded inward" and is easily remembered because these surfaces "cave" in. The opposite is convex meaning "curved or rounded outward." Both words have been around for centuries but are often mixed up. 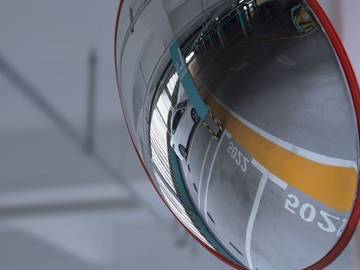 Advice in mirror may be closer than it appears.

Merriam-Webster is a very serious company (although we prefer to be thought of as a lexicographic concern, employing sense 4 of concern as a noun), and so when we are asked to help people distinguish between two easily confused words we do not wallow in silly little mnemonics.

No! Not for us are the vapid memory aids, the admonitions to “remember that X begins with a Y.” We instead provide you with serious tools, such as the etymology of each word, and thus allow you to distinguish between them as a scholar would.

So if you need to tell the difference between concave and convex simply remember that convex comes from the Latin word convexus, which may mean either “convex” or “concave” or … wait a minute. Please disregard our earlier advice.

Neither word is particularly recent; concave has been in English since the 15th century, and convex since the 16th.

Make a holowe case of sylver, after the fashion of a concave glasse, outwardly laboured with curious art of gravyng, not onely for ornament, but also for lyghtnesse.
— Jean Taisnier, A very necessarie and profitable booke concerning navigation, 1575

If it be convexe, or round outward, the best way to measure the breadth is by two stations: but if it be hollow inward, you must measure no further then from your féet to the right line, which runneth betwéene the two ends of the thing propounded.
— Thomas Hood, The use of the two mathematicall instruments the crosse staffe and the Iacobs staffe 1596

Each of these words has multiple meanings, but the reason most people look them up, we are fairly certain, is simply because they have trouble remembering which one bows out and which one bows in. Sometimes silly little mnemonics are the best tool for the job.