We all know what an adjective is—it's “a word that describes a noun or a pronoun.” Most of us probably feel comfortable modifying our adjectives. If we want to ascribe a quality to a thing or a person, we reach into our trusty quiver of adjectives and pick one; if we want to describe that person or thing as having more of that quality, or the most of it, we need do naught but tack on an -er or an -est to the adjective, and Bob’s your uncle. 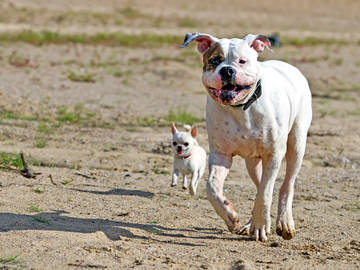 If an adjective has only one syllable, you can usually just add '-er' or '-est' to it, as in "One of these dogs is bigger than the other."

That’s easy enough, isn’t it? No, it most certainly is not.

The rules governing modification of adjectives were apparently crafted by a sardonic and cruel deity. After spending even a smidgeon of time trying to decipher them, the only thing of which you will be certain is that Bob is definitely not your uncle (it’s more along the lines of Bob is your ex-husband’s second cousin, twice removed).

If your adjective has a single syllable (fat), then you can usually just add an -er or an -est to it. Unless!

1. It is an exception, such as the words ill, good, wrong, well, far, and a handful of others. Some of these words are still inflected (farther/farthest), while others are modified with the words more or most (as in the case with ill).

2. It is a participle (“an English verbal form that has the function of an adjective and at the same time shows such verbal features as tense and voice and capacity to take an object”); these adjectives, whether one syllable or more, are not modified with -er or -est. So you would say “that toast is more burnt than I would like it to be,” rather than use burnter, and “it was the most lost I had ever been,” rather than use lostest.

3. It is not a gradable adjective. A gradable adjective is a word which permits degrees of variation (a certain dog may be fatter than another dog). The question of what exactly makes an adjective non-gradable is a perplexing one, as many people hold differing opinions on the matter. Some people think that certain adjectives are what we refer to as absolute (such as unique and perfect), and should have no degree of variation due to their indicating the utmost state of something (there is little agreement on which words are, in fact, absolute). And there are other non-gradable adjectives, such as electronic or atomic, which do not easily admit degrees of variation, simply because it would be awkward to do so (it is possible that one radio could be more electronic than another, but it just sounds odd). There are not many single syllable adjectives that fall into this non-gradable category, although at one point certain such words, such as flat and true, were considered absolute. Additionally, there are a handful of single-syllable non-gradable adjectives that are not absolute (such as due), which do not take kindly to having -er or -est added to them.

If your adjective has two syllables then you will sometimes modify it with -er or -est, and sometimes you will not. This is where things get a bit confusing.

1. Two-syllable adjectives ending in a vowel (such as gentle) or a vowel sound (such as mellow) will generally take -er or -est.

2. Two-syllable adjectives ending with an r or a t usually will allow modification with -er or -est (tenderer/tenderest, quieter/quietest), although certain words, such as dulcet, eager, and dapper, will sound peculiar if you do this.

3. Two-syllable words ending with -d are a bit of a crapshoot; some find that solider/solidest sounds just fine, while others tend to use more solid. Many people find that stupider grates on their ears, although if we accept solider there’s really no reason to avoid stupider. Similarly, profounder is commonly used, while fecunder will likely offend the ear.

4. Most other two-syllable words ending in a consonant do not take -er or -est (more callous is preferable to callouser). But once again, there is no absolute rule in this area; it is fine to say that a thing is commoner than another thing, but it sounds quite off to say that someone is wantoner than someone else.

If your adjective has three syllables or more (and this is where things get a bit less confusing) you will almost always avoid using -er and -est. Unless!

1. If your adjective has three syllables, but begins with the prefix un-, it may (or may not) take an -er or -est at the end (as in uneasier, unfriendliest, and unhappier).

2. You are writing in the style of English that existed several hundred years ago. In the 16th and 17th centuries it was not at all uncommon to find long words such as honorable, glorious, and beautiful written as single-word comparatives and superlatives.

In case you are not yet sufficiently confused by all of this, we have not yet even addressed the issue of whether or not one should use a superlative adjective when referring to only two things. Some usage guides hold that you should use the comparative form should unless you are referring to at least three things. For example, these guides frown upon saying someone is the “youngest child in a family” if there are only two children. Other usage guides, including our own, find this distinction unnecessary: for example, if this rule were to be followed strictly, we would be forced to say “put your better foot forward.”

If you are now beginning to wish that you had never heard of comparative and superlative adjectives, you needn’t worry overmuch; there are simpler ways of making your choice than memorizing the text above. One way is to simply look up the adjective in the dictionary, which will usually specify whether -er/-est or more/most is called for. Another, even simpler way is to follow the sage advice offered by William Henry Maxwell, the 19th century author of Introductory Lessons in English Grammar: “There is, however, no general rule for comparing such adjectives. The ear is the best guide.”