Is It Wrong to Say 'Very Unique'?

The unusual case of 'unique'

Adjectives make up about 20% of English words. Some are modified frequently: very heavy, extremely tall, mostly sunny, seriously flawed. But a substantial majority are rarely modified, not because of any grammatical rule, but simply because their meanings are so technical or specific that they don’t need to be: provable, midcourse, umbilical, ultraviolet. These words have narrow applications and often name a quality that does not exist in degrees. They are rarely used in the comparative or superlative, but this is a consequence of logic, not of grammar. 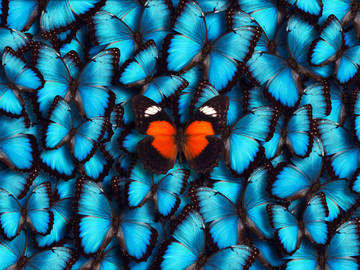 'Unique' is often cited as a word that should never be modified, as its original meanings were "being the only one" and "unequaled." But 'unique' has another meaning, "unusual," and it's common to modify the word when it's used this way.

Needless to say, people confuse logic and grammar. Grammar is not logical. Nevertheless, some grammarians insist that certain adjectives, usually called “absolute adjectives,” can never be modified. The grammarian Joseph Wright, for example, in his A Philosophical Grammar of the English Language from 1838 (and like others before and since), gave a list of adjectives “which admit of no variation of state”—in other words, that cannot be modified. His list includes words like square, dead, entire, false, and obvious. And yet, evidence of actual usage shows that almost square, nearly dead, whole entire, mostly false, and plainly obvious are all commonly used and standard. Which would make him very angry.

Another word in his list is excellent, and it’s true that this is a word that is seldom seen in the comparative, though the superlative most excellent is common. Arthur Conan Doyle modified excellent in a way that stands out to modern ears twice in the Sherlock Holmes stories—both times in words spoken by the Great Detective himself:

“You would oblige me by bringing your very excellent field glass.”
—Silver Blaze

“Your advice is very excellent, Miss Harrison.”
—The Naval Treaty

Very excellent is a good example of a plausible but uncommon way to modify an adjective. It might not be a very necessary phrase, but that’s not the point: even Sherlock Holmes doesn’t apply logic to grammar. It’s a good thing that Philosophical is in the title of Wright’s book, since his list is more about ideals than linguistic reality. It’s a wish list.

The ideal that these list makers wish to uphold has to do with the purest interpretation of the definition of a word. According to this idealistic interpretation, a square must have four right angles, or it is simply not a square; false must mean only and exactly “not true.” We know that neither word is always used in its absolute sense, however, since angles might be “nearly square” or an answer to a question might be “mostly false.” Life is not made up of absolutes, and language bends accordingly to accommodate. It does not break.

Unique is often cited as a word that should never be modified, and it presents a special case because of the evolution of its meanings. It comes from the Latin word unus (“one”), and its original meanings in English were “being the only one” or “sole” and “having no like or equal” or “unequaled.” These meanings are about as absolute as they can be, and are seldom modified. However, words that are in widespread use have a tendency to take on extended meanings, and unique also came to mean something that was unusual or rare, as in “a unique opportunity” or “a unique feature.” The fact is, the original (and most absolute) meaning of unique is the word’s least commonly used meaning today (meaning “sole” or “only,” as in “the unique copy of my manuscript”). But modifying unique when it means “unusual” is common:

This is the on-the-mountain portion of the most unique partnership in skiing.
—Barry Svrluga, The Washington Post, 10 October 2010

The bacteria growing in and on the human body is so unique and so revealing that scientists believe germs will soon help catch bad guys.
—Mandy Oaklander, TIME, 31 August 2015

Our evidence shows that very unique is much more frequently used in spoken English than in professionally edited writing, which means that it is understood to be more informal and should be used with care. Though there is no strict rule of grammar that prevents modifying these adjectives, we must remember to be very careful.