'Cole' hints at what you're eating.

Coleslaw is the correct spelling for the cabbage-based side salad often served alongside barbecue. It is sometimes mistaken as "cold slaw" as it is usually served cold (and early records use this term), but the word derives from the Dutch koolsla, with cole referring to cole crops such as cabbage. 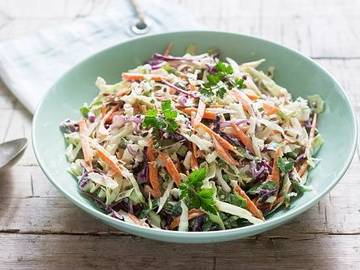 Etymology is the main course.

Coleslaw is the common name and spelling for the side salad listed on restaurant menus (especially those having barbecue, seafood, or fried food options) that typically consists of raw shredded cabbage with a mayonnaise- or vinegar-based dressing and is ordinarily served cold. The name is from Dutch koolsla, a combining of kool (meaning "cabbage") with sla ("salad") that results in "cabbage salad."

Evidence of English forms of the salad's name dates to the late 18th century, and early records attest that it was initially called cold slaw, an Anglicization of the Dutch perhaps influenced by the salad's temperature. Whatever the reason for the formation, people familiar with the food item began tinkering with its name. For instance, the Latin-based cole was substituted for cold and the spelling variant slaugh was used with cold or cole. The name was also chopped to slaw or slaugh.

… suitable quantities of potatoes, onions, beets, cold-slaw, rice, and all the other minutiae of a goodly dinner.
— James Fenimore Cooper, The Spy, 1821

Select firm, fragile heads of cabbage, (no other sort being fit for slaugh).
— Lettice Bryan, The Kentucky Housewife, 1839

Reed traces coleslaw to the pickled cabbage "cold slaugh" of the Tar Heel State's early German and Dutch settlers. In his forthcoming book, "Barbecue: A Cookbook," Reed quotes Wilber Shirley, the owner of half-century-old Wilber's Barbecue in Goldsboro, as saying: "I won't even sell someone a barbecue unless they get coleslaw. If they want a barbecue and they don't want coleslaw, there's something wrong with that person. It all goes together."
— Jim Shahin, The Washington Post, 24 June 2014

In time, the spelling coleslaw was settled upon by the makers and eaters of the "cabbage salad." The substitution of cole for cold seems the best choice when you consider that cole refers to the salad's main ingredient. That noun is used to designate any of various hardy crop plants derived from the wild cabbage and goes back to Old English in the form cāl, which grew from Latin caulis, meaning "stem" or "cabbage." Cabbage, broccoli, brussels sprouts, kale, cauliflower, and kohlrabi are examples of cole crops, and each can be prepared for a slaw/salad. Whereas cole in coleslaw gives an idea of what could be in the "slaw," cold only makes reference to temperature and does not hint at what is being eaten. As an aside, cole and cold are sometimes mixed up when describing plants. Although cole crops are essentially "cold crops" in that they can thrive in cool or cold weather, cole designates a kind of plant and so isn't interchangeable with cold when specifically referring to cabbage or its relatives.

Correction: A story about Alaska State Fair cabbages on Page B-1 of Friday's Alaska section incorrectly referred to cabbages as a "cold crop." It should have said "cole crop."
— George Bryson, The Anchorage (Alaska) Daily News, 31 Aug. 2007

Another reason for the preference of coleslaw is that cold slaw becomes a misnomer when the salad can also be enjoyed warm or hot.

In our markets, heads of beautiful red cabbage, white or light green varieties as well as darker green, elongated Napa and the crinkled Savoy cabbages are appearing in greater abundance with the season. The personalities of each lend many options for including this healthy vegetable in autumn menus. Recipes range from cold to hot coleslaw and salads to stir-fry….
— Sherrel Jones, The Oklahoman, 2 Nov. 2005

It is somewhat understandable how, today, cole in coleslaw might be misinterpreted as cold. Cole is not a common term; to those unfamiliar with it, cold as part of a name for a salad usually served cold would be considered correct. However, coleslaw is the proper name for the salad made from a cole crop plant. In the past, cold slaw and coleslaw may have been used interchangeably, but cold slaw has since soured as a variant. Of course, a person mentioning cold slaw could possibly be applying the clipped form slaw of coleslaw to refer to "cold coleslaw." That's possible and technically correct, but it's more likely that person means simply "coleslaw."