Can 'Anxious' Be Used to Mean 'Eager'? 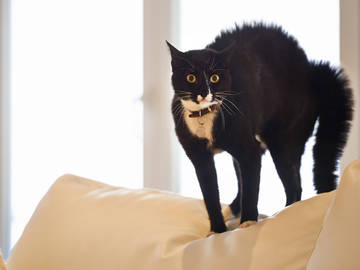 If you use 'anxious' to mean "eager," most usage guides will disagree with your choice. On the other hand, people—including Jane Austen, Kingsley Amis, Lord Byron, Flannery O’Connor, and several thousand others—have been using 'anxious' this way for hundreds of years.

Many usage guides caution against using anxious in one of the senses for which we provide a definition, which is “ardently or earnestly wishing.” Here is a sample of what you will see if you turn to most such books for guidance:

Anxious should not be confused with desirous. It means “feeling anxiety.”
—Frederick William Hamilton, Word Study and English Grammar, 1918

Anxious/Eager – The distinction is worth preserving. To be anxious about something is to be worried or uneasy about it. To be eager is keenly to desire something.
—James J. Kilpatrick, The Writer’s Art, 1984

Why are so many people eager to use anxious improperly? Are they anxious about writing too slowly? Read this carefully: Anxious implies fear and worry.
—Lauren Kessler & Duncan McDonald, When Words Collide, 8th Edition, 2012

Eager is the older of the two words, dating in use to the 13th century. However, the earliest sense of this word was not the one that is commonly found today; it initially had the meaning of “marked of its kind by reason of notable development of some quality (such as sourness, savor, fierceness, violence, chill, or vigor).” It did not take on the sense of “desiring” until the 16th century, around the same time that anxious began to be used. Our earliest evidence for anxious comes from 1529, in Thomas More’s The Supplycacyon of Soulys: “for to shew that he hath not left hys anxyouse fauour toward his natyue country….”

When did people begin to treat anxious as a synonym of sorts for eager? The Oxford English Dictionary has citations for such use dating from 1570, so it has been used in this fashion for almost 450 years, if not longer. And for most of this time the fact that anxious was working one job in which it meant “worried” and then moonlighting at another one where it meant “eager” didn’t seem to bother people. For evidence that this mixing up of anxious and eager didn’t raise hackles until the 20th century, we may look at the writings of professional nitpickers of grammar and usage from the 19th; many of them appear to have used anxious to mean “desirous of” when writing books which may be classified as “scolding people for the bad way they use the English language.”

To please Mr. Gould, who seems to be very anxious to prolong this controversy, I continue my criticisms on his language.
—G. Washington Moon, Bad English Exposed: A Series of Criticisms on the Errors and Inconsistencies of Lindley Murray and other Grammarians, 4th ed., 1871

…though they unquestionably laid claim to a kingly dignity that the nation was not anxious to concede to them.
—Gilbert M. Tucker, Our Common Speech, 1895

I mention, as in courtesy bound, an account of this construction which has been sent me by a correspondent anxious to vindicate Shakspere from having used a modern vulgarism.
—Henry Alford, A Plea for the Queen’s English, 1864

Occasionally a guide in the 20th century would point out that the use of anxious to mean eager was well-established, and not really that much of a problem (H. W. Fowler, in his 1926 Modern English Usage wrote that the objections to anxious as eager were “negligible” and that the use was “almost universally current”), but for the most part the people who write books on how language should be used have argued against it.

So what should you do?

Whether you choose to retain the distinction between anxious and eager is entirely up to you. On the one hand, if you use anxious in the sense of eager, most usage guides will disagree with your choice. On the other hand, this use is quite common, and a fair number of writers (including Jane Austen, Kingsley Amis, Lord Byron, Flannery O’Connor, and several thousand others) have been using anxious in this fashion for hundreds of years now.