Most of us are familiar with the words broadcast and broadcasting, as they have been long intertwined with the medium of television, and therefore intertwined with much of our life. But how many know the related word narrowcasting? 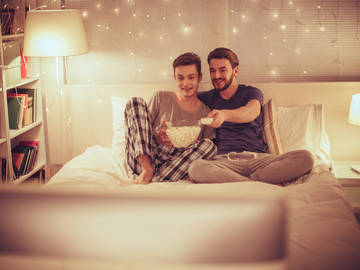 'Narrowcast' means "to aim a broadcast at a narrowly defined area or audience." Though it's become more popular as entertainment becomes more specialized, the term dates to the early 20th century.

This term (“radio or television transmission aimed at a narrowly defined area or audience”) has been in use since the 1920s, coming into use shortly after we began using broadcasting to refer to the practice of sending out radio or television signals to a wide audience. But broadcast did not begin with the advent of electronic media: the word had already been in English use for some two hundred years.

Broadcast came into English in the very beginning of the 18th century, and originally had the meaning of “a casting or scattering in all directions (as of seed from the hand in sowing).” It appears to have first been used as a noun, and shortly after took on additional duties as a verb and an adjective (a process known as functional shift.

‘Tis sown with a broad Cast at two Bouts or sowings, the first sowing being harrowed in once, and the second sowing as many times as is needful to cover it well and to make the Earth fine, which commonly requires 6 or 7 harrowings.
—John Mortimer, The Whole Art of Husbandry, 1707

Barly-ground is first harroughed once in a Place to hinder the Grains getting into the Thoroughs, then it is sown by Broad-casting all over the Ground, and directly harroughed both Ways into the Earth.
—William Ellis, Chiltern and Vale Farming Explained, 1733

Broadcasting was largely used in this agricultural sense for quite some while, but eventually expanded its meaning to “the act of making widely known: the act of spreading abroad.” So it was a natural fit for the word to be used in reference to the dissemination of radio programs once commercial radio took off in the 20th century.

Hereafter, in addition to broadcasting reports of obstructions to navigation by the radio stations of the navy at the seaboard at 8 A. M, noon, 4 P. M. and 8 P. M., the navy radio station of Arlington, VA., will, whenever appropriate, broadcast such messages at 10:30 A. M. and again between 3 and 4 o’clock A. M.
—The Baltimore Sun, 27 Dec. 1912

Narrowcasting was adopted about a decade after broadcast began being used to refer to the widespread beaming of radio signals and programs.

“Narrow-casting” is a new word in the radio dictionary. It refers to use of the local light and telephone lines to bring to the homes concerts and other forms of entertainment sent out on high-frequency waves.”
—The Evening News (Harrisburg, PA), 8 Dec., 1922

“There may be selective methods and narrowcasting methods which will do no harm,” he said. “But fundamentally there will remain that element of the broadcast situation which makes it possible for grand opera to go to the poor as well as the rich, without charge.”
—Fitchburg Sentinel (Fitchburg, MA), 28 Dec., 1923

The meaning of narrowcasting has shifted subtly over the ensuing decades, although it has retained the core sense of “message delivered to a small group, rather than large.” As the Internet, an increased number of cable television channels, and subscription radio stations have begun to play an greater role in supplying news and cultural offerings, narrowcasting has seen far more use, as it describes the increasingly specialized options that these media offer.

And where once it was a case of adding more and more lights to houses to multiply the "wow" factor, the latest Christmas light innovations are hi-tech, with an increasing number of homeowners creating computerised displays synchronised to music that is narrowcast on FM radio channels.
—Michelle Pountney, Herald Sun (Melbourne, Australia), 11 Dec. 2015

In this way, the present invention can be said to "microcast" or "narrowcast" the content of personalized songlists to individual listening stations or users.
—Telecommunications Weekly, 7 Sept. 2016

Since Internet advertising works best when narrowcast, the more accurately companies can target their advertisements, the greater is their revenue.
—Mint (New Delhi, India), 21 Sept. 2016

In addition to being applied to these sorts of niche programs, narrowcasting is beginning to be used in a political sense, in which it refers to sending a message to a distinct group of supporters, rather than the populace as a whole.

It's the fact that that we no longer have broadcasting, we have narrowcasting. Individual politicians are no longer dependent on parties….
—Richard Haass, transcript Bloomberg Surveillance, 20 Sept. 2016

Political parties, by contrast, are narrow-casting, putting the bulk of their efforts into revving up their base while spending less time trying to persuade swing voters.
—Emily Cadei, Newsweek, 10 Jul. 2015

Fast forward to President Barack Obama's use of social media as well as big data in his two successful presidential election campaigns to target the demographics, narrow-cast (or tailor) the message to the psychographic level, raise funds from the masses, and bring them out to vote.
—M. Netzley & S. N. Kenkat, The Straits Times (Singapore), 31 Jan. 2016

Narrowcasting, when used in a political sense, would appear to have a degree of overlap with dog whistle, which is also a term for sending a message to a select, as opposed to widespread, group of people. However, narrowcasting does not seem (as of yet) to have the connotations of racially coded messaging that dog whistle has.

It remains to be seen whether narrowcast will continue to, ahem, broaden its semantic range, or whether it will remain confined to a relatively slim range of meanings. In the meantime, you now have a word with which to describe the mildly unsettling feeling that accompanies an Internet movie or radio service suggesting titles you might like, or the ads that follow you online and suggest things based on your browsing history that you might like to purchase: you are being narrowcast to.