It's when we speak to you and it's like you're not here.

As a literary device, apostrophe refers to a speech or address to a person who is not present or to a personified object, such as Yorick's skull in Hamlet. It comes from the Greek word apostrephein which means "to turn away."

You are already familiar with the punctuation mark known as the apostrophe. It’s used chiefly in tandem with an s to indicate possession (as in Joe’s car) or in contractions to stand in for letters that are elided (as in couldn’t or you’ll).

If you study drama or rhetoric, you will be familiar with an entirely different idea of apostrophe—that is, the making of a speech or address to an absent person or a thing that is personified (such as Death).

As Love’s play begins, she stands tense and exhausted on her front porch, surrounded by red, rolling sky, pulling on a cigarette and staring into the void. She speaks aloud a letter she’s writing to someone called Ruby, then falters, turns the paper over, and begins to write to God instead. (Love’s play features an epigraph from Alice Walker’s The Color Purple, and the novel’s influence is present throughout, especially in Olivia’s apostrophes to God.)
— Sara Holdren, Vulture, 15 Oct. 2018 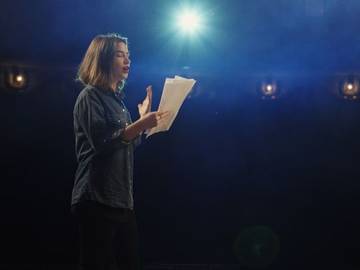 A commonly cited instance of apostrophe occurs in William Shakespeare’s Hamlet, when Hamlet comes across the skull of the jester Yorick, which has been exhumed. “Alas, poor Yorick!” he says, calling his old friend “a fellow of infinite jest, of most excellent fancy.” He then turns back to address Yorick by way of the skull:

Ham. Where be your gibes now? your gambols? your songs? your flashes of merriment, that were wont to set the table on a roar?
— William Shakespeare, Hamlet

Apostrophe can consist of one speaking to an inanimate object—such as how Tom Hanks's character addresses the volleyball named Wilson in the film Cast Away (2000). It can occur as a figure of speech, as in the old advertising slogan "Calgon, take me away!"

The adjective apostrophic pertains to the dramatic device:

"Thirteen Ways of Looking at a Chicken" was, apparently, written with a total lack of irony. It includes a stanza full of apostrophic plea to meat substitutes: "Oh soy 'chicken,' where are your bones? / Where shall I get broth, rich in minerals? / Oh soy 'chicken,' where is your fat? / Without Jewish penicillin, how to cure my husband's cold?"
— Kathleen Alcott, The New Yorker, 22 June 2015

The verb strephein, meaning “to turn” in Greek, is found in other words pertaining to the art of rhetoric. One is anastrophe (the inversion of the usual syntactical order of words for rhetorical effect), often referred to as Yoda-speak, for the sagacious Star Wars character known for speaking in object-subject-verb syntax. An example comes from Charles Dickens’s David Copperfield (1848): "Talent, Mr. Micawber has; capital, Mr. Micawber has not." Epistrophe is the repetition of a word or expression at the end of successive phrases, clauses, sentences, or verses (such as Abraham Lincoln's "of the people, by the people, for the people"). And we would be remiss if we didn’t bring up catastrophe, which to most people means an utter failure or disaster, but in theater refers to the final action that completes the unraveling of a dramatic plot.

And while we’d hate to end our article on apostrophe on such a catastrophic turn, them’s the breaks.