Although it's old, altho doesn't get much love.

Altho is an acceptable spelling of although, and it dates as far back as the 14th century. Its use however has fallen out of favor in light of the more common spelling. There is always a chance it will come back as shorthand language is often revived in certain use cases such as texting.

Although is a conjunction that means "in spite of the fact that" or "even though," as in "Although it was raining, a glimmer of sun was visible through the clouds."

If you really want to, you can also spell it altho. 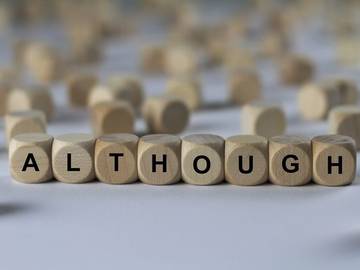 It was around long before texting was invented.

This spelling is not common, but it's attested as far back as the mid-1400s, and was fairly common in both prose and poetry from the 17th century to the mid-20th century.

Your letter of Dec. 20. was 4. weeks on it's way to me. I thank you for it: for altho founded on misconception, it is evidence of that friendly concern for my peace and welfare which I have ever believed you to feel.
— Thomas Jefferson, letter to Henry Clay, 29 Jan. 1815

Altho the shadow of the future occupied Roland's mind almost to the exclusion of everything else, he was still capable of suffering a certain amount of additional torment from the present …
— P. G. Wodehouse, A Man of Means, 1916

Cody's never seen this country before altho he's an old Californian by now, I can see he's very impressed and even glad he's come out on a little jaunt with the boys and with me and is seeing a grand sight….
— Jack Kerouac, Big Sur, 1962

At the end of the 19th century it was one of the spellings urged on the English-writing public by various spelling reformers, including the Simplified Spelling Board and the National Education Association. President Theodore Roosevelt and the Chicago Tribune, among others, were fully on board. Altho did well for a while, but after a promising couple decades at the start of the 20th century, it mostly fell from favor. For reasons unknown, the use of altho had mostly dwindled to a smattering of use by the mid-1990s.

The story on altho is far from over, however. Modern modes of communication (especially the ones that involve typing with our thumbs) lend themselves to shortened word forms. Altho (and its kin, such as tho and thru) may yet make a comeback.