Allusion refers to the act of making an implied or indirect reference to something. An illusion is either a mistaken idea or something that is false or not real but that seems to be true or real.

One of the trickiest aspects of English is that the language is particularly rich in words that come from the same root, are spelled and sound quite similarly, and yet have meanings that are profoundly different. Welcome to illusion and allusion. 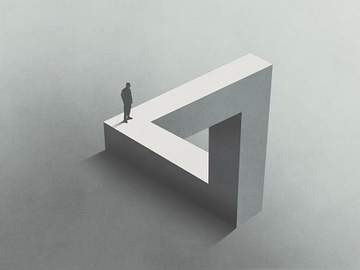 Keep your eye on the usage.

The Meaning of 'Allusion'

The Meaning of 'Illusion'

Illusion has a few more meanings than allusion does, and most of them are concerned with deception and misleading, rather than indirectness. An illusion may be “a misleading image presented to the vision,” “a perception of something objectively existing in such a way as to cause misinterpretation of its actual nature,” or “the state or fact of being intellectually deceived or misled.” Just as allusion has the verb form of allude, illusion likewise has the word illude. It is not nearly as common as allude, and you will not encounter it very often; among its meanings are “delude,” “to subject to an illusion,” and “to escape from.”

Both of these words can be easily confused with delusion, especially illusion, with which it shares considerable port of its meaning. A delusion is “something that is falsely or delusively believed or propagated” or “the act of tricking or deceiving someone : the state of being deluded.”